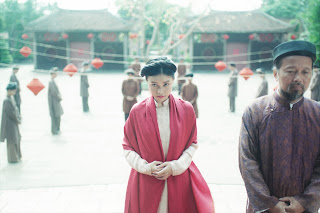 Fourteen-year-old May (Nguyen Phuong Tra My) enters into her marriage to Hung (Le Vu Long) in the opening moments of “The Third Wife.” She’s, as the title describes, the wealthy landowners third wife, brought into the household in addition to his other two wives – Xuan (Mai Thu Huong Maya) and Ha (Tran Nu Yên-Khê). The film follows May as she learns her new role in Hung’s house – basically to supply the man with a much wanted son, his other two wives having only supplied him with one, Xuan’s son (Nguyen Thanh Tam).

Writer / director Ash Mayfair introduces the audience to the world of nineteenth century Vietnam through the eyes of May. May soon becomes pregnant, her innocence and subsequent pregnancy illuminated by metaphor – the life cycle of moths. A close up of their worm-like state is shown before showing them in their cocoons after May first has intercourse, a visual signal of her upcoming pregnancy.

For most of its runtime, “The Third Wife” is an excellent movie that’s beautifully photographed as it chronicles May’s induction into the household and her pregnancy. Though the film’s characters live in a luxurious home, they don’t all live luxurious lives. The harshness of life during that time period is revealed as May navigates her way into her new life. Still more child than woman, May leans on Hung’s other wives to show her the way, resulting in a greater attachment to them than to her own husband.

“The Third Wife” is a slower paced movie. In this case, the pace works in the film’s favor. Audiences are given the chance to observe the household, viewing the customs and habits of the people of this distant time. A wealthy background wasn’t sure to induce happiness. Daughters were considered undesirable because they were women, their enforced societal roles equally undesirable, while sons were faced with unwanted arranged marriages in substitution for love.

Any good momentum built throughout the film is lost in its concluding moments. The final twenty minutes (estimated) cause the end of the story to feel clunkily closed off, extending the narrative past its expected conclusion. Viewers are presented with footage chronicling the fate of a minor character, the footage lasting for a confusingly long stretch of time before shifting into flashes of imagery shown throughout the movie. In addition to this, the moth metaphor is never satisfactorily closed off. Though the creatures show up again in the final moments, they are presented in a way that causes their visual purpose to become confusing. What started out as chronicling growth is now associated with death.

“The Third Wife” is worth watching for its excellent photography and acting though it’s unfortunate that the ending causes the viewer to be left feeling more confused than satisfied.
(Review by Bret Oswald)

Posted by Dallas Movie Screenings at 10:38 AM