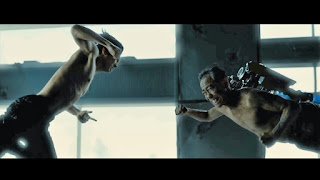 Based off a manga by Hiroya Oku, director Shinsuke Sato’s feature film “Inuyashiki” is a fresh take on the tiring superhero genre. Previously adapted into an animated mini-series in 2017, the property now shifts into the live-action territory. Working off a screenplay by Hiroshi Hashimoto, Sato’s “Inuyashiki” gets off to a more than promising start, introducing viewers to superhero-to-be Ichirō Inuyashiki (Noritake Kinashi).

Inuyashiki is an aging business man. Humble and submissive, looked down on by his family and friends, he doesn’t line up with the visual idea of a superhero that audiences have come to expect. In fact, if you were to go into this movie cold, knowing nothing of its plot, it comes as quite a surprise when, shortly into the feature, Inuyashiki is hit by an extraterrestrial blast while walking through a park late one night, the darkness of the scene jarringly interrupted by a blindly bright flash.

Outwardly, Inuyashiki looks exactly the same – an older man who’s more than starting to show his age – but inwardly, his muscles and organs have been replaced with complicated, intricate machinery. Now more machine than man but still capable of human emotions, Inuyashiki discovers that his new body, in addition to no longer being able to handle eating miso soup or having much of an appetite, has the capability of healing the sick. He begins using his new powers to heal ailing people throughout the city.

Unfortunately, Inuyashiki wasn’t the only person in the park that night. High school student Hiro Shushigami (Takeru Satô) was also there and also had his body replaced with the alien technology. While Inuyashiki is using his powers for good, Hiro takes the villainous route, using his powers to kill. His method of choice – forming the fingers of his hand into a fake gun and blowing holes in people by nonchalantly saying “pow” as he pulls his pretend trigger, his corny gesture is often met with laughter from his foes before they are, literally, stopped dead in their tracks.

Sato’s film has a lot going for it. The film spends a good portion of its opening act fleshing out Inuyashiki, compelling played by Kinashi who is very convincing in the role. The meek man’s new situation is shown with comedic flair, starting the movie out with a playful tone that is replaced with a more mean-spirited one by the film’s second act as it struggles to connect the audience with this world’s new villain, Hiro.

In all ways, Hiro is the opposite of Inuyashiki. Cold, aloof, and seemingly uncaring, his nature only growing worse as he learns to use his new found powers. He starts off causing general mayhem, moving cars around a parking garage, before shifting into his terminator mode. Once the film shifts gears, taking a darker, more somber tone in place of its initial playfulness, its problems start to arise. “Inuyashiki” starts to grow dull, focusing too much on Hiro’s finger-pointing gun shtick as he begins to openly attack the city through its electronics.

For the most part, the movie’s effects are well-handled. Inuyashiki and Hiro’s mechanical bodies look organic when they are exposed, integrating well into the live-action footage. It’s only when the movie settles into its action heavy climax that the effects start to look noticeably off, but by then you’re either into what the film is doing or not.

Sadly, “Inuyashiki” starts to feel mundanely repetitive by the time it’s over. It crawls its way to the finish line, faking audiences out by starting the credits before a mid-credits stinger scene pops up. The scene is rather lengthy for this sort of thing, causing an already long film to feel longer. This movie is apparently the first of a planned trilogy – the production company, obviously desiring to release more movies in this franchise, using this end credits sequence to leave the story open-ended for a sequel. “Inuyashiki” is an intriguing film that gets off to a good start before getting bogged down by its sluggish conclusion. Perhaps an editing of the final act could have helped with this film’s pacing.
(Review by Bret Oswald)