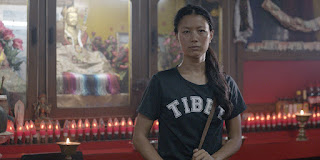 A group of people are walking across a snowy landscape. The picturesque scene is broken by the close-up imagery of the weather-beaten, worn, and obviously stressed out subjects – Tibetan refugees forging their way to a hopefully better life in Delhi, among them a young girl and her father. Their dire situation is made worse as shots ring out and members of the group fall to their death.

“The Sweet Requiem” directed by Ritu Sarin and Tenzing Sonam (with Sonam also writing the screenplay) offers audiences a confusing narrative as its story jumps around in time. The movie starts off on the wrong foot with this unexplained opening scene and never fully recovers. From the snowy terrain of the Himalayas, Sarin and Sonam move their story to the city of Delhi (in what turns out to be a significant time jump of nearly twenty years) where the film now focuses on twenty-six-year-old Dolkar (Tenzin Dolker), who turns out to have been the young girl seen traveling with her father in the film’s opening scene.

Even as Sarin and Sonam attempt to clear-up their purposefully unchronological story, they only end up raising more questions. A series of flashbacks occur throughout “The Sweet Requiem” that reveal more about how the group got to that moment shown in the film’s prologue, although these are also shown in no apparent order. Viewers are offered the protagonist’s past as if they are sitting inside her memory with events that happened later sometimes shown before events that happened earlier. Dolkar and her father leave behind her mother and sister. Why have these two stayed in Tibet while Dolkar and her father attempt to make the trek into India? No explanation is ever given. As for the refugees’ flight from their home country, Sarin and Sonam make the assumption that their viewers know of the situation in Tibet, never taking an opportunity within the film to attempt to shed light on the subject.

Dolkar is active within Delhi’s Tibetan activist community, forming a close friendship with fellow activist Dorjee (Shavo Dorjee). When an older refugee, Gompo (Jampa Kalsang Tamang), enters into the community, Dolkar is forced to confront the memories of her escape.

“The Sweet Requiem” is finely handled from a few technical perspectives. The camerawork and lighting look excellent, aiding the film in creating its dire atmosphere. As a whole, it leaves a lot to be desired. The acting often feels wooden and the frequent flashbacks cause the film’s editing to feel uneven. Perhaps if it had been put together in a different way “The Sweet Requiem” could have been a more compelling watch. As it’s been released, its ninety-minute length feels like something far longer. It’s not a total misfire, but it’s close.
(Review by Bret Oswald)