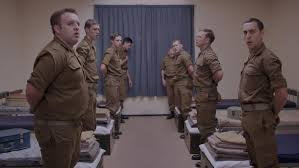 “Kanarie” (“Canary” in English) takes place in mid-1980s South Africa during Apartheid (a fact that viewers will either know or not know at the film’s start). Writer/director Christiaan Olwagen and his co-writer Charl-Johan Lingenfelder don’t mention anything related to the country’s history as the movie starts, allowing viewers to become aware of South Africa’s social/political climate through the eyes of the film’s lead character Johan (Schalk Bezuidenhout).

Johan is a high school student living with his parents in a small town. On a dare from two friends (both female), Johan walks down the street wearing a wedding dress. Out on the street, the dress’s veil covering Johan’s face, Olwagen shifts the characters into a fantasy dance number featuring Bronski Beat’s “Smalltown Boy,” a seemingly odd choice given that Bezuidenhout is made up to look like Boy George – Johan’s obsession/idol – during the scene. This sequence sets the tone for a movie that doesn’t follow. Shortly after this dare, Johan is drafted into the army. Attempting to make his service more palatable, he auditions for (and is accepted to) the South African Defence Force Choir and Concert Group, a small choir within the army whose 23 members are known as Kanaries.

Armed with his collection of records, Johan heads to training. On the train, he meets Ludolf (Germandt Geldenhuys), a fellow member of the Kanaries. The closeted Johan is off put by the behavior of the effeminate Ludolf, whose antics he worries will draw unwanted attention. At training, he finds a kindred spirit in Wolfgang (Hannes Otto), who shares his taste in music. Under the direction of Reverend Engelbrecht (Jacques Bessenger), the boys begin to practice for their eventual concert tour. The terror of discovery and its repercussions in a time and country where homosexuality is a punishable crime mount on top of the stress of military service requiring Johan to come to terms with himself.

Olwagen chooses to film the movie with mostly long takes, creating a visual and rhythmic disparity to the inner stress put upon the film’s characters. The soundtrack, mostly made up of religious hymns heard during the rehearsals and performances of the choir, is serene, aurally complimenting the film’s imagery. The camera at times languishes as if attempting to capture still photographs. A technique first used as the boys get their haircut and later used when they are at the border. The early sequence fits within the movie but the later one feels slightly disjointed, showing images of violence amongst its portraits when the exact purpose of the youth’s enlistment hasn’t been made entirely clear.

Performances are fine with Bezuidenhout, Otto, and Geldenhuys standing-out among the cast. Their on-screen relationship with each other helps to make their characters feel real. Bezuidenhout makes Johan’s insecurities apparent in contrast to the self-assuredness displayed by Otto and Geldenhuys.

Olwagen’s film is advertised as a coming-of-age war musical. The only questionable part of this description is the word “musical.” Yes, there is singing in Olwagen’s movie but it isn’t included in a way (besides the opening scene and a sequence that takes place in a night club) that makes one think of a musical.

There are pacing issues (some scenes go on just a bit too long) but, as a whole, Olwagen’s film works. “Kanarie” is an intriguing coming-of-age film, using a backdrop quite different than what’s usually seen in the genre.

On DVD and Video on Demand on June 18.
(Review by Bret Oswald)