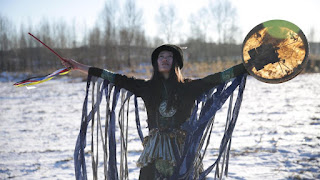 “The Widowed Witch” opens with a scene shot in color – a wooded landscape, snow covered and barren treed, that Er Hao and a man are walking through. They come upon another man, who kills her companion and blows a fiery torch into her face. When she awakens, she’s paralyzed. Her world now shot in grim black-and-white. Unable to move but fully conscious, she’s incapable of answering her care-givers or fending off unwanted advances when no one else is around.

It’s during this unwanted sexual encounter that Cai inserts the film’s title sequence. When Er Hao is in her paralyzed state, the film is shown from her perspective. The camera is placed where her head rests and there it stays, showing the voyeuristic audience members only what this vulnerable woman can see. It’s not clear from the way these opening scenes are handled that the woman in the color sequence, the woman who’s face we don’t see, and the woman who we eventually come to see as the main character are one-in-the-same, making it seem as if the opening scenes of “The Widowed Witch” are completely unrelated to the rest of the film. This stylistic choice causes the remainder of the movie to be less engaging, causing viewers who don’t catch on to wonder when the opening scenes are going to come back into play.

Er Hao finds herself without a home, hers having been destroyed in the same explosion that killed her most recent husband. The opening scene in the woods is a dream used to convey this information instead of seeing their home explode. Stuck with the care of a young child (whose connection to her is never made clear as far as I could tell), she lives a nomadic life in a van. That is until she’s mistaken for a true shaman and begins using her “gifts” to get herself and her ward room and board.

Cai keeps the footage in dim black-and-white, occasionally accenting objects with illuminating colors – some lights and the coals of a burning fire. The film is told through a series of long-takes similar to the opening shots of Er Hao’s paralyzed-point-of-view. This editing technique gives the film a glacially slow, excruciating pace. It feels as though nothing is happening for long stretches of time, exacerbated by the knowledge of the film’s incongruous opening scene.

By the time “The Widowed Witch” sluggishly ends, it’s more than over-stayed its welcome. It’s a film that more of an endurance test than it is something pleasurable to watch. To be honest, I absolutely hated watching this film. At times, it was photographically pleasing, but overall, pure torture to watch from beginning to end.
(Review by Bret Oswald)