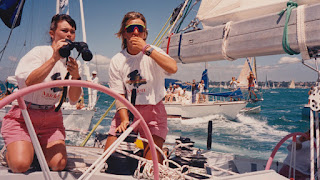 Through the use of archive footage and one-on-one interviews, director Alex Holmes tells the story of Tracy Edwards, her crew, and her ship Maiden. Edwards name, perhaps not instantly recognizable to most potential viewers, is famous in the world of competitive sailing for being the skipper of the first ever all-female crew to compete in the Whitbread Round the World Race.

“Maiden,” the name of her boat taken for the title of this documentary, begins with Holmes briefly chronicling Edwards’ early life. Holmes, using voice-over taken from his own interviews with Edwards, tells of her happy early childhood before revealing that it abruptly ended with the sudden death of her father. Her mother, unable to keep her husband’s business running, eventually decided to remarry. Unfortunately, her stepfather turned out to be an abusive alcoholic, which caused Edwards to grow into an angry and rebellious teenager and resulted in her running away from home.

Edwards found solace among the misfits and burn-outs found in the boating crews around island resorts. In 1985, she managed to get a role as cook (the only position she could get in the male-dominated sport of sailing) for a crew entering the fourth Whitbread Round the World Race. Her time on the crew, which she spent learning and absorbing as much as she could, led to the fruition of an idea – entering an all-female crew in the next Whitbread Round the World Race, which competes every three years.

What’s obvious to modern audiences, since this is a documentary, and we are watching interviews with all of the crew members, wasn’t so obvious to the world in the late-80s. Holmes’s documentary spends the majority of its length telling of Edwards’ willpower and determination in getting herself and her crew into the race. She struggled with funding, acquiring a boat, and getting a crew ready for a grueling, nearly year-long, water-bound race.

Edwards’ crew didn’t follow the trajectory many journalists and sports fans anticipated. They expected the group of women to be irritable and moody, incapable of working together or even completing the first leg of the race. Instead, Edwards and her crew revealed themselves to be a unified team more than capable of competing among the best in the unforgiving ocean waters.

The archival footage is rough looking. However, while the footage isn’t as visually appealing as modern audiences have come to expect, it’s more than adequate to give viewers a sense of what these women went through. This footage, in combination with the interviews conducted by Holmes, tells a compelling story. Editor Katie Bryer arranges the footage, both new and old, into a well-organized narrative. Unlike some documentaries which take a stream-of-consciousness approach to their topics, subjects are only introduced as they become relevant (and vanish when they become irrelevant) to the story. Although the documentary is a little dry at times, it manages to remain intriguing thanks to the passion these women show, even thirty years after the event, for their time preparing for and competing in the Whitbread Race Round the World.

There are some elements of the race that Holmes could have explained better. When your purpose is to inform, it’s best to assume your viewers know nothing. It’s mentioned that the boats are divided into classes but never made entirely clear how many are in each class. At one point, it’s stated that Maiden came in third place on one of the six legs of the competition (the leg aspect is mostly made clear by Holmes) but never clarified if this was last place or if other boats came in behind them. The mechanics of the race aren’t clearly communicated to viewers either. Is there a specific course each boat must take from point A to point B? Holmes also never specifies how long they are given a land furlough before returning to sea. A count of days at sea is also shown throughout that is a bit misleading since it doesn’t start over after they’ve had a period on dry land.

Nonetheless, “Maiden” is an intriguing and inspiring documentary about hard-work and determination.
(Review by Bret Oswald)