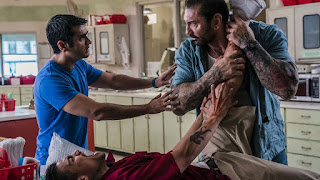 The film Stuber showcases Kumail Nanjiani as a rather chill easy-going Uber driver ( Stu) whole by chance becones caught up in a rather bloody and violent police/ criminal car chase across LA, tracking a really bad drug dealer.

LAPD detective Vic Manning (Dave Bautista) hires Stu when his car is destroyed because he wrecked it while trying to drive after LASIX surgery against Dr orders. Both are a study in personality contrasts and intensity levels, especially because Stu is desperately trying to make a good impression and earn a coveted five star passenger rating, after several rides hilariously leave him with one star or worse ratings. Vic is extremely desperate and blindly driven in getting this guy, who escaped him many years earlier.

Stu and his fastidiously maintained Uber car find themselves in for the ride and experience of their lives. Stu isn't exactly the bravest branch on the tree, a rather innocent and peace living guy. We are often pleasantly entertained by his shocked and panicked reactions as things unfold in an odd combination of violence and comedy.

Be forewarned. The film is quite violent. Sometimes it makes sense and sometimes it just feels off. A few innocent bystanders are taken out in the process of the pursuit and that's just frustrating. Evil drug dealers you know. The casting is all there and they do the best they can with a rather predictable story line. It is certainly amusing in parts.

Happily, Mira Sorvino makes a return to the screen but her talents seem somewhat wasted. Joining her are Betty Gilpin and Karen Gillan in additional minor roles. One being the friend/ hook up Stu has been trying to get to all day and night long as he begins to realize he's going to be busy driving and ultimately aiding Vic until his goal is realized. No matter how long it takes.

Opinions appear mixed. Critics are not enthused but audiences are throwing their interest into this pairing.
(Review by Cheryl Wurtz)