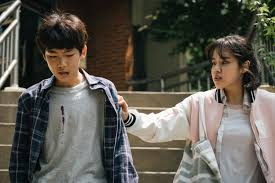 After the sudden death of her parents, Youngju (Kim Hyang-Gi) has her childhood stolen away, left with the care of her younger brother Youngin (Tang Jun-Sang). Five years later, the siblings living situation has only worsened. Youngju is now on the cusp of turning twenty, entering into adulthood with no degree and no career prospects – she works stocking shelves. Her aunt (Chang Hyae-Jin), who was left with the fiscal responsibilities of Youngju’s parents (their debt and paying for the care of their children), wants Youngju to sell their apartment. Desperate to hold on to their home, Youngju denies her aunt’s demand but finances are on the verge of evaporating and trouble soon arises.

Writer / director Cha Sung-Duk’s debut feature “Youngju,” titled after it’s lead character, is a melancholic story about loss, its effects, and finding comfort (and maybe forgiveness) in surprising places. Youngin falls in with the wrong crowd and gets himself into legal trouble. Now in need of money to keep Youngin from being locked up and having burned bridges with her aunt, Youngju decides to confront the man responsible for her parents’ deaths in hopes of demanding money from him to help with her financial woes.

Her search leads her to the workplace, a small shop selling tofu, of Sang-Moon (Yoo Jae-Myeong) and his wife Hyang-Sook (Kim Ho-Jung). Without telling them who she is, Youngju starts working for the couple. But instead of fulfilling her initial desire for revenge, Youngju finds herself sucked into the lives of the troubled couple, who have had their own share of dilemmas and set-backs due to the accident caused by Sang-Moon.

“Youngju” is a character driven film, a movie more focused on exploring its characters’ emotions and their interactions with each other. Sung-Duk doesn’t present Sang-Moon as someone to be reviled (or even to pity). He’s just an everyday man on the street who had an accident that, unfortunately had long-lasting, devastating ramifications. Sung-Duk keeps the story simple, keeping the film dramatic without delving into soap-opera like melodrama.

The actors do a fine job in their respective roles. Kim Ho-Jung fares the best of the lead cast. She does a fantastic job of portraying the nurturing wife of Sang-Moon, attaching herself to Youngju in lieu of her own child. The other roles feel fairly typical for this type of film. The performances work in context of the movie but none of the actors, other than Ho-Jung, really stood-out.

Like the acting, the cinematography doesn’t offer up much of note. Again, like the acting, it’s typical for this type of film. The camera’s often unsteady, bobbing around slightly instead of keeping a steady shot. It also works in context of the movie but doesn’t leave the audience with any memorable imagery.

Sung-Duk draws the story to an emotional charged climax that, unfortunately, overstays its welcome. The point is made but instead of moving on and closing out the film, Sung-Duk lingers for an extended period of time on his subject. What could have been a satisfying conclusion to this quiet story is dragged out to nearly unbearable lengths. It gets its point across but leaves the audience to stew in it, a decision that may cause some viewers to leave with feelings of frustration rather than release.

Worthy of checking out if you are into emotionally and character-driven dramas. Otherwise, it’s probably better to seek out another film to view.
(Review by Bret Oswald)