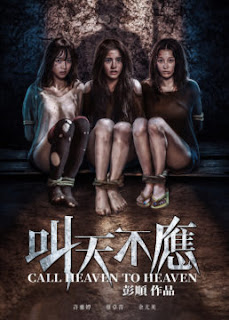 Movies in the thriller genre seem to fall into one of two categories - those that work and those that don’t. Director Oxide Pang’s new film, “Call Heaven to Heaven,” is one that falls into the latter category.

Pang’s movie is a hectically edited mess of a film. Viewers are immediately introduced to the movie's quick and choppy editing style as its lead characters - two social media stars, Mengli and Xiaomiao (played by Joyin Choi and YoMi respectively), and their friend Yuying (Kabby Hui) - decide to do a live feed of an outdoors adventure. The film’s editing decisions were likely chosen by Pang to mirror the fast-paced world of Mengli and Xiaomiao’s social media presence.

The trio decides to go camping on an island, bringing along the boyfriends of two of the girls. The importance of these two to the plot is so low that I couldn’t even begin to guess which boy belonged with which girl. At the waterfront, the group discovers that the ferry has already left for the day and decide to accept a ride in the boat of an older woman, Granny Xiong (Cao Yang).

This is only the insipid stars' first mistake (with many more yet to come). Midway into the ride, Granny proposes the group head to a more remote, less-traveled though still touristy island that she claims has wi-fi access to film their show from. The five-some agrees, only to learn after they are dropped off that the promised tourists and shops are nowhere to be seen. Abandoned without internet or cellphone access, the group is soon in over their heads because Granny lives alone on the island with her deformed grandson and she wants him to mate with the girls.

Their boyfriends are quickly dispatched, and the girls easily kidnapped and locked away; their only hope to appease the crazed Granny. Pang’s film is sure to irritate its share of viewers either through its abuse of the lead characters, their idiotic behavior / choices, or both… as if the Michael-Bay-style-editing alone wasn’t bad enough.

Once locked up, the trio begins to plan their escape. But each eventual attempted escape is, of course, quickly thwarted because otherwise there wouldn’t be enough to fill a feature film. The girls stupidly never take the opportunities they are handed to incapacitate their captors, making sitting through this movie even more annoying (there are multiple opportune moments that they could have used to their advantage).

Amongst the insipid story and nauseously edited ruckus, some elements manage to shine through. There are a couple of well-handled and well-composed shots, mostly toward the film’s concluding moments when the camera glides along behind the girl’s as they attempt to escape. This skillfully handled shot abandons the hectic nature of the rest of the movie for some unknown reason.

Even with these few well-handled moments, this movie is terrible. It’s a noxious, horribly handled exploitative story, that perhaps could have worked at least slightly better with a different approach. “Call Heaven to Heaven” has been met with censorship problems in its home country, China, so who knows when or if it will see a more prominent release - not that anyone will (or should) care. Nothing in this film lands. Despite the contents of its story, it’s neither thrilling or scary, just something viewers will wish to quickly end out of boredom and lack of caring.
(Review by Bret Oswald)