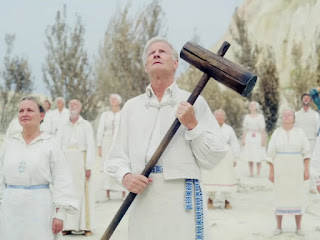 Last year Ari Aster’s debut feature film “Hereditary” was released. The film – chilling, hypnotic, and oozing with dread (not to mention an incredible lead performance from Toni Collette) – instantly became a hit with both horror fans and the art-house crowd, leaving viewers ravenous for more from the director. His sophomore feature, “Midsommar,” is finally upon us.

Florence Pugh plays Dani, a young woman whose close-knit family is currently experiencing some familial problems. Dani’s boyfriend, Christian (Jack Reynor), has grown tired of dealing with her but doesn’t have the guts to break off their relationship, something his friends – Josh (William Jackson Harper), Pelle (Vilhelm Blomgren), and Mark (Will Poulter) – encourage him to do.

The film’s prologue plays out in the desolate, dead of winter as the film’s ominous soundtrack (the orchestral score by The Haxan Cloak is perhaps the best part of the movie) envelops the viewer in Dani’s sense of dread as she worries about her bipolar sister. The casting is spot on, Pugh is fantastic as usual and Reynor does a great job playing her wishy-washy, spineless boyfriend. Aster builds up the dynamic between the characters, laying a layer of insecurity for Dani and Christian’s strained relationship (something the already stressed Dani knows nothing about) that comes into play later on, as Dani experiences a devastating emotional blow, something that leaves her in a deep depression and causes the reluctant Christian to continue their relationship. Unbeknownst to Dani, Christian and his friends are going to Sweden. The trio – Christian, Josh, and Mark – has been invited by Pelle to visit his commune while they perform their Midsommar festivities, an event that occurs every ninety years. Shocked to learn of their trip right before it happens, Dani is invited to tagalong by Christian.

The wide-open, green, and sunny Swedish countryside that Dani now finds herself in is a stark juxtaposition to the claustrophobic, bleak, and snow-filled prologue. But the touring Americans don’t find themselves in a leisurely getaway. Instead, stuck in a locale where they don’t know the customs or the language, the cheery landscape starts to entrap them.

Cinematographer Pawel Pogorzelski does an excellent job of shooting the film. The prologue is dark and confined and shadow-filled before the story is shifted to Sweden. There, the photography is often overblown, the cast shot in wide shots that allow the viewer to soak in the greenery of the commune and its odd architectural structures.

Many will note the similarities of Aster’s “Midsommar” to Robin Hardy’s 1973 horror hit “The Wicker Man,” recently remade in 2006 starring Nicolas Cage. Though their specifics are different, it’s obvious that Aster was inspired by Hardy for his newest film. As a result, “Midsommar” is a movie that ultimately feels like one you’ve already seen despite Aster’s insertion of some slightly xenophobic commentary. Its character arcs and storyline are predictable with its end result all too transparent.

Like “Hereditary,” “Midsommar” goes for a slow-moving approach to its terror. The narrative, purposefully paced (to its own detriment) and overly long, crawls its way to its inevitable and predictable conclusion. At a runtime of nearly two and a half hours, Aster’s movie edges on the side of self-indulgence. The same story could have been told in a shorter timeframe, though part of this reaction could be the result of having to deal with rude viewers who couldn’t sit quietly through the movie.

“Midsommar” is a film that general audiences are going to have a hard time sitting through. It’s best to think of it like a drama with horror elements rather than an outright horror movie. It’s definitely worth seeing but perhaps best to hold off for a home viewing without distractions. Aster is creating a mood here and the mood can be easily broken by the wrong audience.
(Review by Bret Oswald)