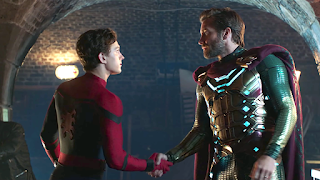 Marvel’s final film in their third Phase, “Spider-Man: Far from Home” arrives with some big expectations. “Far from Home,” the third film released this year in Marvel’s cinematic universe, returns the series to a smaller scale despite its international locales. Where “Endgame” was vast in scope and somber, “Far from Home” goes in the opposite direction, presenting a zippy, fast-paced blockbuster.

In Mexico, Nick Fury (Samuel L. Jackson) and Agent Maria Hill (Cobie Smulders) investigate a suspicious “natural disaster” where they meet a new hero Quentin Beck (Jake Gyllenhaal), later to be known as Mysterio. The scene, so short it feels like you could blink and miss it, does little more than offer a hint of what’s to come and give viewers a brief introduction to a new character before shifting the focus to the titular hero.

Tom Holland returns as Peter Parker, aka Spider-Man, as the world continues to attempt to recover from the mess created by Thanos. Peter wants nothing more than to kick-back, relax, and enjoy his European school trip with his classmates – including his best friend Ned (Jacob Batalon), romantic interest MJ (Zendaya), and class bully Flash (Tony Revolori) – but as usual for a superhero, duty calls. Instead of getting to focus on getting together with MJ, who’s also getting advances from classmate Brad (Remy Hii), Peter finds himself partnered up with Mysterio to save the world from a new threat.

Jon Watts, director of the web-slingers last solo movie, “Spider-Man: Homecoming,” is once again in the director’s chair. Working off a script by Chris McKenna and Erik Sommers, Watts presents a film that’s light-hearted and funny without ignoring or belittling the emotional baggage, which is obviously taking its toll on Peter, the characters carry over from previous events. The film’s many action scenes are well handled. Watts shoots them in a manner that makes them easy to follow without being dull.

The cast delivers fine performances. Holland does an excellent job showing Peter as he attempts to deal with the issues he’s confronted with, both those that teens are typically exposed to and those they are not. The relationships between the cast members also works well. The rapport between Peter and Ned is sharp, his awkward interactions with MJ (this new darker take on the character is still hard to swallow but Zendaya plays the part well) feel natural, and he’s able to hold his own against his professional acquaintances, like Beck and Fury. Gyllenhaal continues to show off his acting range with his first role in a superhero movie. The writers use the characters’ romantic relationships for comedic fodder. Ned unexpectedly falls for one of their classmates and Aunt May and Happy Hogan, Marisa Tomei and Jon Favreau respectively, are engaged in a suggested romantic fling. Both couples’ interactions are used in humorous ways to lighten the mood.

“Far from Home,” is a tighter paced movie than “Endgame,” which felt like it could have used some trimming in more than a few places. While “Far from Home” also has a few of these moments, they are less noticeable with the narrative moving the story along almost as soon as a stagnation in pacing is felt. The film would have left a much better impression had it not been for one of the credit scenes, which may rub more than a few viewers the wrong way. Still, “Far from Home” is a lot of fun.
(Review by Bret Oswald)