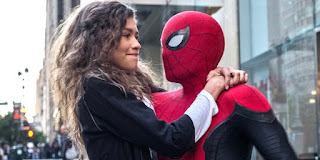 “MCU’s Spider-Man: Far From Home becomes the closing door to Phase Three.”
Marvel Studios have much more commitment and integrity on releasing two-to-three films per year, earning as much revenue from the box-office.

In the film, Peter (Tom Holland), now 16 years old is travelling to Europe with his classmates on a summer class trip where he has a chance to woo Michelle "MJ" Jones (portrayed by Zendaya). However, he is then recruited by Nick Fury (Samuel L. Jackson) and Quentin Beck/Mysterio (portrayed by Jake Gyllenhaal) to battle the Elementals who are attacking parts of Europe.

Parts of the cast, including Marisa Tomei, from Spider-Man: Homecoming returned with Samuel L. Jackson and Cobie Smulders appeared as supporting characters and Parker’s mentors after Tony Stark. Jake Gyllenhaal also joins in as Quentin Beck/Mysterio, setting up a slow, gentle chemistry between him and Holland, a reminiscent of Spider-Man’s relationship with Tony Stark/Iron Man.

Jon Watts returns to the director’s chair of helming his second Spider-Man film. He did not just rehash the Peter Parker’s sticky-web flying techniques, but this time, he teach the character about the basic life as an ordinary human being and not focusing on Spider-Man ego too much, a recall from Tony Stark’s words from Homecoming. Watts, taking much influence from the original Spider-Man trilogy and The Amazing Spider-Man reboots, keeps his steady focus on character developments and less-messier, but meatier outlooks to both Spider-Man, Nick Fury, and Mysterio based on how he did with other heroic and villainy characters in Homecoming.

The styles, action sequences, and the battle scenes are all done by series of humongous FX creatures and strong visual-effects that serve as main element for the entire film, the plot twist, new outlooks for the actions sequences, and the Jake Gyllenhaal ‘s Mysterio character. The FX consumption and the massive usages of visual effects are bit too much that would make the movie to earn piles of money and they really bring up the whole spidey-thing down to the ground. It’s like too many eggs in the basket or too much stuff to carry. Not as enjoyable to consume much more CGI than Homecoming nor the original Spider-Man trilogy.

Each of the characters’ performances are outstanding with numerous funny dialogue, elements of surprise, and wishy-washy personalities, including those from Tony Revolori, Remy Hii, and Jon Favreau. Also, what is a big surprise is that J.K. Simmons returns to his role as J. Jonah Jameson from the original Spider-Man trilogy, co-starring with Tobey Maguire. However, what I did not like about this film is when several characters reveal and discover Spider-Man’s true identity, which is very untraditional to these Spider-Man films as this serves a biggest climax of the film’s plot and my personal biggest takeaway from this film.

Out of all the colors in the film, if you ask where does Far From Home fall on the scale of one to ten? My main answer is that the good movie with richer taste of malevolence and Peter Parker’s character as an ordinary human with valuable consequences to be summoned. Although, it wasn’t as enjoyable as the last one and Spider-Man: Into the Spider-Verse, for which it won an Oscar for Best Animated Feature. It is a superhero film, but it’s actually placed in the romance section for that matter. I like it, but my higher expectations seem to drop down lower than I expected. That’s all I going to say, I can’t give out any spoilers away on the film, but as a final warning, do not watch this film if you haven’t seen Endgame yet. Running time: 129 minutes

Don’t forget, please stick around after the movie for the post-credits scenes.