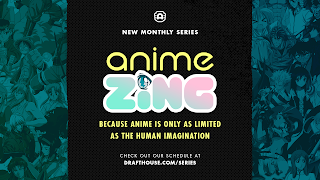 ANIME-ZING – A NEW MONTHLY SERIES DEVOTED TO ANIME LAUNCHES AT ALAMO DRAFTHOUSE IN AUGUST
Anime delivers a colorful world of giant robots, giggling wizards, and post-apocalyptic death machines – but it's also so much more. Beginning in August, Alamo Drafthouse will bring the best of the Japanese artform back to the big screen with ANIME-ZING, a new monthly programming series. ANIME-ZING is dedicated to sharing the wonders of anime with everyone – die-hard enthusiasts and those just curious to see what all the hype is about.

Starting with titles like NINJA SCROLL, MILLENNIUM ACTRESS and VAMPIRE HUNTER D, ANIME-ZING takes a deep dive into the amazing archive of Japanese animation, from the genre-soaked universe of science fiction and fantasy to the emotionally rich dramas about the world right outside our window.

Get tickets to NINJA SCROLL here, or check out the official ANIME-ZING series page for more info and upcoming shows.
###


About Alamo Drafthouse
Alamo Drafthouse Cinema was founded in 1997 as a single-screen mom and pop repertory theater in Austin, TX. Twenty-two years later, with 40 locations and counting, Alamo Drafthouse has been called "the best theater in America" by Entertainment Weekly and "the best theater in the world" by Wired. Alamo Drafthouse has built a reputation as a movie lover's oasis not only by combining food and drink service with the movie-going experience, but also introducing unique programming and high-profile, star-studded special events. Alamo Drafthouse created Fantastic Fest, a world renowned film festival dubbed "The Geek Telluride" by Variety. Fantastic Fest showcases eight days of genre cinema from independents, international filmmakers and major Hollywood studios. Alamo Drafthouse's collectible art gallery, Mondo, offers breathtaking, original products featuring designs from world-famous artists based on licenses for popular TV and Movie properties including Star Wars, Star Trek & Universal Monsters. Alamo Drafthouse continues to expand its brand in new and exciting ways, including Birth.Movies.Death., an entertainment content platform for movie lovers, and the American Genre Film Archive, a nonprofit film archive dedicated to preserving, restoring and sharing film.

Posted by Dallas Movie Screenings at 11:43 AM