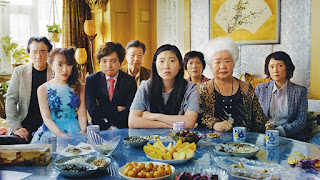 Writer/director Lulu Wang shared the story of her grandmother's illness on This American Life. Wang expanded it into a semi-autobiographical feature film that will linger in your heart for a long time to come as it addresses the nature of immigrants dealing with two cultures. Starring rapper and actress Awkwafina (a.k.a. Nora Lum) who was the scene stealer in Crazy Rich Asians plays Billi whose parents brought her to the U.S. as a child. The film premiered in the U.S. Dramatic Competition section at the 2019 Sundance Film Festival.

The beginning of the film declares that the story is "based on an actual lie". Billi discovers that her beloved grandmother Nai Nai (Zhao Shuzhen) has been diagnosed with lung cancer and only has a few months to live. Apparently it is common in families not to tell the sick person they are going to die, so her parents (Tzi Ma and Diana Lin) didn't tell Billi that they were going back to China because Billi who wears her heart on her sleeve would not be able to keep the secret. Billi goes anyways. The pretext of the whole family visiting is her paternal cousin is getting married to his Japanese girlfriend of only a three months. Her Nai Nai is thrilled for the reunion and is organizing a huge wedding party wanting lobster but can only get crab. Nai Nai is a force in which her two sons, their wives and children, various aunts and uncles revolve.

One would think such a somber subject would be a tearjerker. It is, but in a good way. Wang immerses the viewer into the personal dynamics of the family. The universality of family gatherings especially when dealing with those who left for another country versus those who stayed is quite understandable even if it's just people who moved to another city coming back to the homestead. You may not see them for years, but you step into the same rhythm enjoying the differences. Plus it's the big dinners when the family gathers and everyone is talking, catching up with their lives. Food is the translator woven together with love. Billi can't seem to stop the tears pooling in her eyes thinking that she is losing her grandmother who she calls fairly often from New York. But she manages to keep the information inside while enjoying each and every minute she can share with her Nai Nai. Awkwafina shows that she is more than a comedic distraction in a plot. She makes us remember it's important to appreciate one's family ties and hug the one your with.
(Review by reesa)