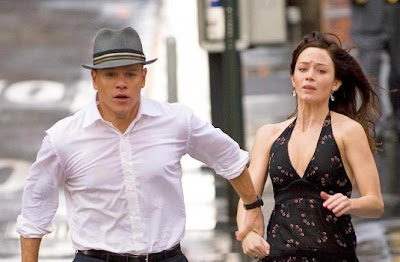 David Norris is the youngest politician running for the US Senate. Unfortunately some early missteps during his college days is leaked to the press right before the election. While rehearsing his losing speech he runs into a mysterious woman hiding in the mens bathroom. Their chemistry and banter leads them to a kiss before she runs away from two men in pursuit. Smitten, David can't seem to get her out of his mind. This becomes problematic for the Adjustment Bureau assigned to his case. The suits with hats team must make minor “tweeks” too keep him on his life path.

Based on a short story by Philip K. Dick, writer/director George Nolfi who wrote the Bourne Ultimatum, works again with Matt Damon as the charismatic David Norris. Emily Blunt is the dancer Elise who is distracting David from what the Adjustment Bureau considers his destiny. When his case worker Harry Mitchell (Anthony Mackie) falls asleep on the job and fails to make David spill coffee on his shirt so that he would miss the bus, David ends up on the bus where he sees Elsie. Sparks fly between them and she gives him her phone number. When David arrives at work at the venture capital firm run by his old friend and campaign manager Charlie Traynor (Michael Kelly), he finds everyone in his office frozen in time. There are men in white overalls beaming lights around Charlie's head. Running with the men cutting him off at every pass, he enters through a doorway that exits to a large empty warehouse. It is there that Harry's supervisor Richardson (John Slattery) explains to David that he must forget about Elise and not meet her again. Doing so will cause a ripple effect on the direction of his plan which may lead to the White House. If he doesn't stop pursuing Elsie, the Bureau will have to “reset” him, or basically lobotomize him. The attraction is too strong, and David risks everything to have Elise in his life. Terrace Stamp shows up as “The Hammer”, the last resort to particular problems.

Nicely paced, the concept that touches on the issues of free will and predestination. There isn't a heavy handed religious tone with the Bureau wearing suits and hats (that let them gone through doors that become passage ways to different locations) that are close to being considered angels. The suits report to the Chairman in this huge skyscraper building where meticulous records are kept on everyone's plan. There's a nice chase seen at the end and some tense paranoid moments, but no mindless car chases or gun play. There's some intriguing philosophical issues that are fun to consider over drinks after the movie time. And you will taking second looks at guys with suits and trilby's from now on.
(Review by reesa)

Email ThisBlogThis!Share to TwitterShare to FacebookShare to Pinterest
Labels: The Adjustment Bureau Review