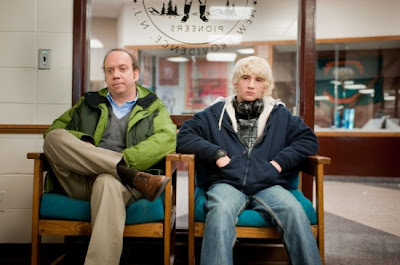 Mike Flaherty is an attorney whose practice has not been doing very well as of late. The boiler in his office building is making loud thumping noises and there's not enough money to fix it. He's also moonlights as a high school wrestling coach and the team is on a losing streak. Mike decides to take on the guardianship of a client who suffers from dementia to collect the fees that comes with it. But things get complicated when the man's grandson comes to stay after running away from his mother who is in rehab.

Paul Giamatti with his schlubby demeanor plays Mike Flaherty married to Jackie (Amy Ryan) and has two daughters Abby and Stella. He muddles through his days considering putting plastic over the files in the boiler room just in case it explodes and the lack of clients for his practice. Desperate Mike concocts a scheme where he will take on the guardianship of Leo Poplar (Burt Young) who is in the early stages of dementia but wants to stay in his home. The court allows it but Mike still checks him in a senior care facility while pocketing the $1500 a month guardianship check. He keeps this scheme from his wife and family. After settling Leo into the nursing home, Mike discovers at Leo's house the estranged grandson Kyle sitting on the door step so he takes him in despite Jackie's misgivings.

Kyle played by newcomer Alex Shaffer looks like a cross between teen aged Eminem and a young Sean Penn. His Kyle is terse and sullen like most real life teenagers, but with a glimpse of innocence hidden. He visits with his grandfather and goes with Mike while he coaches the high school wrestling team with Co-Coach Vigman (Jeffrey Tambor). The school's motto is “The Home of Champion”, but the team has been been not doing too well. Kyle asks to join in and Mike discovers he is a star athlete and enrolls him in the high school. Pretty soon they are winning. Kyle seems more animated and making friends. Even Jackie and the kids are becoming attached to the young man. Life seems like a win-win situation for Mike when suddenly Kyle's mom Cindy (Melanie Lynskey) shows up out of rehab looking to take a reluctant Kyle back and take control of the monthly guardianship pay.

Thomas McCarthy ( The Station Agent and The Visitor) directed and wrote the script with Joe Tiboni. It's one of those quiet films that gives an honest portrayal of an everyday guy caught in unusual circumstances that threatens to spiral out of control. Mike is a good guy with a big heart, caught in a financial bind tempted by an easy way out. Wonderful performances by Giamatti, and Amy Ryan as is patient but exasperated wife . Bobby Cannavale does a funny turn as Mike's hedge fund bachelor friend Terry Delfino who gets more than a little excited by the wrestling team success. With Win Win you can't lose.
(Review by reesa)