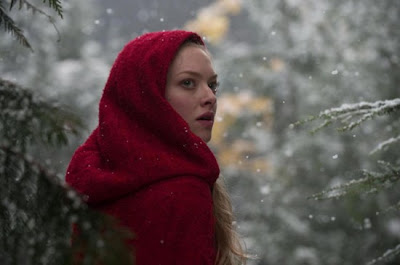 In 2003 Director Catherine Hardwicke did the darkly disturbing Thirteen followed up by the Lords of Dogtown. She seemed to have a handle on the complicated teen mindset. Then came Twilight so full of lingering loved filled teen vampire angst in a sleep inducing cover of the popular book. This Red Riding Hood version of the child classic folk tale from producer Leonardo DiCaprio and Orphan writer David Leslie Johnson will draw obvious comparisons. It's like the new trend of adding vampires to Jane Austin stories by adding a werewolf to already creepy Brother's Grimm.

The opening scene sets the location in the wintry wooded mountains surrounding a medieval village of Daggerhorn. For as long as everyone can remember during every full red moon the villagers set out a piece of their livestock and lock themselves indoors to keep the wolf at bay. Valerie (Amanda Seyfried) is in love with her childhood best friend named Peter (Shiloh Fernandez looking like a love child of Joaquin Phoenix and Robert Pattinson) but she has been promised in an arranged marriage to Henry (Max Irons) by her parents Suzette and Cesaire (Virginia Madsen and Billy Burke). Valerie and Peter plan to run off to elope when her sister is found slaughtered by the wolf. The villagers want to hunt it down while Father August (Lukas Haas) wants to wait as he has summoned famed witch finder Father Solomon (Gary Oldman playing Gary Oldman with an accent that comes and goes). Of course his methods prove to be more radical than the villagers intend, and more paranoid when he suggests the wolf is a shape shifter and can take the form of a human during the day. So everyone starts to look at each other suspiciously.

The dark forested village is a perfect compliment to set off Seyfried's blond hair and bright red hooded cape which despite the snow doesn't seem very practical. The camera lovingly follows her around while she has secret meetings in the hay with Peter even though there's imminent danger of a killer wolf. The werewolf and Father Solomon and his thugs are both taking their toll on the villagers. Valerie has a dream with her grandmother (the ever amazing what is she doing in this movie Julie Christie) that includes those famous lines about big eyes, big ears, and big teeth that used to scare the crap out of little kids. However it's incredibly roll your eyes cheesy. The wolf is just plain bad CGI not looking like a wolf and the size kept fluctuating. The voice-over was unnecessary, it would have been more effective without it. When one notices the sets and lighting more than what's going on in the movie, then you know you are in for a disappointment.
(Review by reesa)

Posted by Dallas Movie Screenings at 12:20 AM