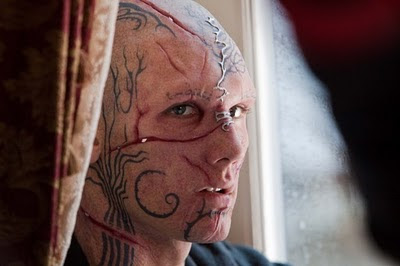 Kyle is a rich privileged teen whose sense of entitlement has made him mean, petty, and arrogant. He wins a school election on the platform that he's good looking and people don't care about what you stand for, they only care if you are attractive. He makes it a point in his acceptance speech to single out Kendra the school goth witch as being particularly ugly . But Kendra spells Kyle to become as ugly on the outside as he is on the inside. He's got a year to get someone to sincerely say they love him or he will stay this way forever.

Alex Pettyfer must be the new teen heart throb judging by the response of the screaming young women in the audience. He has another movie still in the theaters now, I Am Number Four, and was in Tormented and Alex Rider: Operation Stormbreaker. His exercise routine at the beginning elicited gasps of happiness from those of the female persuasion. Kyle's opinion of shunning people for their looks stems from his dad Rob (Peter Krause) a shallow vain television reporter with whom Kyle has to fight for his attention. Only the house keeper Zola (Lisa Gay Hamilton) offers a stable influence. Kyle meets up with Lindy (Vanessa Hudgens) at the celebration party after the election. She ran for treasurer. She comments to him that this is the first time they have officially met after 3 years of school together. For a brief moment Kyle feels a connection to her. Kendra dressed like the real life self of Mary-Kate Olsen enchants Kyle with a spell that tattoos, slashes and mutates his appearance. Doctors can't fix it so Rob moves him to Brooklyn to basically hide him, hires Will (Neil Patrick Harris) a blind tutor and Zola to care for him. Kyle's night time wanderings brings him to watch Lindy. When Lindy's dad gets in trouble, Kyle now calling himself Hunter offers to hide Lindy at his place. It is there that he learns how to listen and learn how to love and be loved.

Director/writer Daniel Barnz who also did Phoebe in Wonderland adapted the story from the Alex Flinn preteen novel of the same name. The Beauty and the Beast theme updated for attention deficient minds lacks the character development found in the Disney version. Kyle is broadly drawn and the nuances of his sudden change and anxiety of his condition are not deeply explored outside of some temper fits. Hudgens only has to look all dewy eyed and smile pretty. You wonder why the shallow Kyle had never looked at her cupie doll cuteness before. NPH throws out some I'm blind but I'm still cool comments and basically doesn't do any teaching. Zola is the token wise woman of color who left her kids back in Jamaica to care for poor misunderstood Kyle. This movie will do well with the Twilight set, not so much for anyone else.
(Review by reesa)

Posted by Dallas Movie Screenings at 12:14 AM