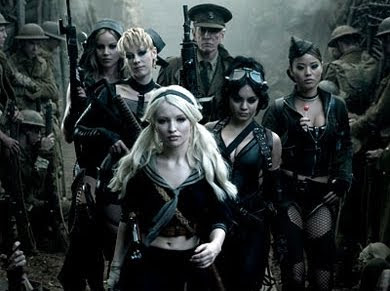 Going into this movie, I had no information. I didn't hear any of the hype, I barely paid attention to the trailer (To be fair, I was distracted.) and I almost arrived late because I am inept at navigation. But somehow I made it and observed that the line was stirring, people talking amongst themselves about how "arty" the film would be. It was directed by Zack Snyder, I overheard. He did 300 and The Watchmen, the long line was emanating a palpable anticipation.  I was sure the aggregate cinematic would be impressive based off the little I gleaned before getting my wristband and popcorn. I recalled the stunning visual of Spartans killing an overwhelming Persian force as I found my seat. I pondered critically Dr. Manhattans junk as I fixed my eyes on the screen.

The lights went down.

Enter 1950s, A dark and dreamy landscape set to somber, desperate music and despair. Tim Burton would have been proud as the foreboding gravitas gives way to the story of a girl (Emily Browning) and the perils she must overcome. She shines like a fallen angel, strong and vulnerable, blond and pink against the black and blue backdrop. The turmoil culminating in her institution, in a time when crazy was locked away and misunderstood, where lobotomy was considered a necessary step and curative process.  During this, Emily's face remains as porcelain, camera fixated on an emotionless caricature. She was like a doll.

Then colors and all the world had changed. Faces, the same yet different, took a trip through the looking glass. All burlesque and brothel now, women and girls and the show taking center stage for another dark twist. Her name is Baby Doll (Emily) and her previous venerability is now twisted sexual. Around her is a crew cast scantily clad. The leader Sweet Pea (Abbie Cornish), her sister Rocket (Jena Malone), the ironically named Blondie (Vanessa Hudgens<3) and Amber
Posted by Dallas Movie Screenings at 12:10 AM