Lord of the Dance 3D 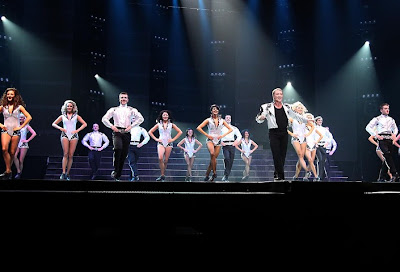 Back in 1995 Riverdance hit the big screen turning traditional Irish clogging into an instant phenomena. The dozens of dancers, straight back, arms to the sides bouncing up and down in military precise steps was fascinating and the live show sold out all around the world. Michael Flatley was only the lead dancer back then. After he broke away to form his own troupe and he became “Lord of the Dance”,

Fifteen years of touring has brought Flatley back to Dublin's O2 arena where he began dancing his signature role. Today he's 52 and still dancing looking like an über fit Liberace and leads the dancers like Siegfried and Roy minus the whip. The staging of this production requires several flatbed trucks and tour buses that requires 8 hours of set up and 4 hours to take down before heading to the next venue. Flatley could have shown a little more of the back stage preparations and the dance rehearsals. After years of shows, it runs like a well oiled machine. The show itself appears to have a story of good and evil with a jester fairy sprinkling sparkles over everyone while visuals are flashed behind to insure the right message to each scene. The dancers hop around in soft shoes or hard tap shoes doing the same variation of steps. Flatley appears in a bejeweled jacket and accepts the audience hero worship by flashing his quick toe steps and high kick leaps. At one point he's seducing a pair of principal dancers blond Bernadette Flynn and dark-haired Ciara Sexton. The next he's battling uniformed bullies who steal his Lord of the Dance cummerbund. At one point he's playing flute with an electric rock band. The women dancers have big poofy hair and a ton of makeup that doesn't seem to melt from the energetic routines. At one point, dressed in multicolored “Colleen” frocks they rip them off and dance in black bikini's. There's also the short skirted fiddlers (Giada Costenaro and Valerie Gleeson), druids, fireworks and a new-age soundtrack. It's all very Vegas.

Director Marcus Viner's focus is more on the flash and fancy of the show concentrating solely on Flatley. The cinematography by Nick Wheeler jumps from one angle to another instead of concentrating on the footwork. Because of this the 3D imagery doesn't do anything to actually enhance the experience. Except the exploding confetti at the end the glasses were more of a nuisance. This will play for a limited run for St. Patrick's day, but probably best wait for the DVD which should be out soon.
(Review by reesa)

Email ThisBlogThis!Share to TwitterShare to FacebookShare to Pinterest
Labels: Lord of the Dance 3D review