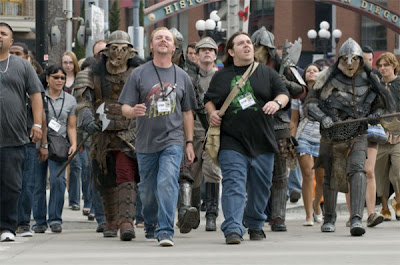 Graeme Willy and Clive Gollings are a couple of English guys enjoying for the first time the holy grail of nerd-dom, the San Diego Comic Con. They plan to drive a rented motor home through Nevada, Arizona and New Mexico visiting all the alien sites like Area 51 and the Black Mail Box. This is their dream and they speculate what it would be like to meet an actual extraterrestrial. They believe they would be the perfect people to have a close encounter of the third kind.

Clive (Nick Frost) is a sci-fi writer and his best friend Graeme (Simon Pegg) is an illustrator who did the cover art on Clive's book. They are in geek heaven visiting all the displays and wonders of the comic con even getting the autograph of their favorite author Adam Shadowchild (Jeffrey Tambor). They stop at the alien theme diner where they run into a couple of red necks who think they are gay. Feeling paranoid they take off quickly. When a car is following them at a high rate of speed blaring the horn, they think they are being targeted. The car passes before crashing. The guys rush to the aid of the driver to find that he's an escaped big headed alien from a government research complex fun by The Big Guy (Sigourney Weaver). She wants him stopped by all means by Agent Zoil (Jason Bateman) the hard nose straight shooter hot on the trail. Clive faints at the site of Paul (Seth Rogan voice) who speaks like Seth Rogan does in every movie. Rude, obnoxious and snarky. They guys agree to help Paul who wants to go back home, but the guys are on the run from the agents and the rednecks. Soon they are running from Moses (John Carroll Lynch) of Ruth Buggs (Kristen Wiig) a one eyed born again creationist who runs the RV campground. The revelation of Paul puts her belief system in an tailspin, with the consequences providing the funniest parts of the movie.

This is the first time that Nick Frost has received writing credits despite the successful partnership with co-writer Simon Pegg. Directed by Adventureland's Greg Mottola the action centers around the relationship of Clive and Graeme meeting an alien who happens to be sort of like them. The situations are humorous, but very laid back tongue in cheek with movie references. There isn't any nudity, but there is very raunchy dialogue that gives the movie an “R” rating. Look for some familiar faces showing up like Jane Lynch as a diner waitress, Jesse Plemons and David Koechner as the rednecks, Bill Hader and Joe Lo Truglio as the goofy agent underlings. Then suddenly there's Blythe Danner. Not a classic as Shaun of the Dead of Hot Fuzz, but an amusing night at the movies.
(Review by reesa)