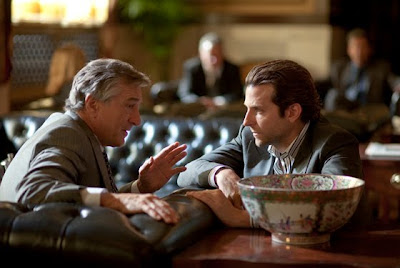 It's been said that humans only use about 10% of our brains. What would happen if we could use it all. Eddie Morra an unemployed writer is given the opportunity to explore that when he's handed a little transparent pill. But what goes up, must come down.

Bradley Cooper plays Eddie a disheveled writer who has only one word of his manuscript done. If he doesn't finish it quickly then he will have to pay back his advance. Things get worse when his girlfriend Lindy (Abbie Cornish) decides to return his keys and break up with him. Drinking away his sorrows he runs into his college girlfriend's brother Vernon (Johnny Whitworth) a former drug dealer. He seems very slick and successful now and offers Eddies a little pill that he says will change his life. As soon as Eddie takes it, he goes home, cleans his house, and does a major job on his novel. His editor is amazed and wants to see the rest of it. But the pill has worn off and Eddie is back to his lackluster self. He seeks out Vernon who he later finds dead. Eddie finds the stash of pills and then calls the cops. Back at his place he indulges in the experimental drug NZT which keeps him focused and confident. His whole aura changes as his eye color. He can recall everything he's ever read, heard or seen. He uses the knowledge to become successful in the stock market that brings him to the attention of Carl Van Loon (Robert De Niro). But Eddie is also drawing attention from someone else. Soon he's being chased and someone is trying to kill him. And there seems to be some serious side effects to the long term use of NZT.

Based on the book The Dark Fields by Alan Glynn the screenwriter is Leslie Dixon (The Thomas Crowne Affair and Freaky Friday) and directed by Neil Burger who also did The Illusionist. The movie is stylish, with interesting FX (if somewhat overused), and brisk paranoid action. The pacing is fast enough to make you unaware of the plot holes but since you are not NZT you may not catch them right away. You become easily distracted by Cooper's perfect man. Cooper who has been mostly seen in films that take advantage of his good looks and comedic timing is able to prove that he's more than just a pretty face. The concept of being able to change your life and really use your brain is intriguing and the ending of the film will leave you satisfied. Have fun and see this movie.
(Review by reesa)