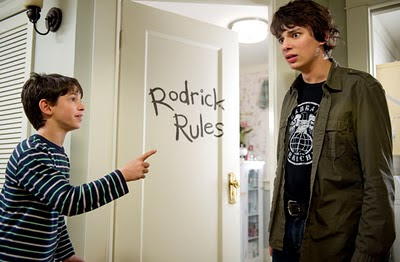 Greg Heffley has survived the start of middle school in the last outing of Jeff Kinney's popular book series. This is the second adventure of Greg and friends who are now in the 7th grade and no longer the low men in the pecking order. His mom who writes an advise column for the local paper wants her sons to spend more time with each other much to Greg's worst fear.

Zachary Gordon is back as the earnest but very put upon Greg at that age when boys have not hit their growth spurt so the girls of the same age are taller. Devon Bostick rocking the drums and the guy liner is back playing Rodrick who is still with the Löded Diper band and still loves to engage in sibling shenanigans. Their mom Susan (Rachael Harris) wants the two to bond because they will always be brothers by bribing them with “mom bucks”, play money that can be exchanged for cash when they are nice to each other. The dad Frank (Steve Zahn) quietly assents to his stricter wife as his only concerns are for the boys not to touch his civil war “figurines”. While Rodrick knows how to play the dutiful son card, he still manages to sabotage Greg's attempts to impress the new girl in school Holly Hills (Peyton List). The parents decide to let the boys spend the weekend alone together taking the youngest child with them. Despite the warning to behave Rodrick throws a party and locks Greg in the basement. Robert Capron is back as Rowley Jefferson springs him and they decide this is a unique chance to explore the world of a teenager by crashing the party. The earlier than expected return of the parents gets the boys to work together to clean up the place and trust each other that no one will break the code of silence about the party and the bathroom door. The whole thing with the replaced door with no lock is the funniest bit in the movie. The boys are also forced to spend a weekend at their grandfather's retirement home which Rodrick causes Greg to run around in his tidy whites. The main story is about Rodrick planning to compete in a local talent show with his band that gets sided-lined due to the trouble they both cause.

Screenwriters Gabe Sachs and Jeff Judah have previously done 90210 and Life As We Know It and Astro Boy director David Bowers have created an episodic adventure that would work well as a regular TV series. Way too many side adventures of Greg playing the invisible game on classmate Chirag (Karan Brar), Rowley and Greg watching scary movies, embarrassment at the roller rink seem to be stuck in the story to add filler. This may work in the book, but seems disjointed in the movie form. Apparently trying to connect the brothers in a common bond wasn't enough for the hour and 38 minute running time. There are five books in the series, so we can probably look forward to what happens to Greg and company before the teen hormones kick in. It's one movie series that encourages kids to read the books and that's always a good thing.
(Review by reesa)

Posted by Dallas Movie Screenings at 12:01 AM