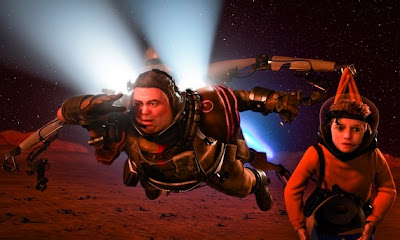 Nine year old Milo is disappointed that his dad's plane is delayed due to weather and he takes it out on his mom as he shout at her that he doesn't love her. But the aliens scanning the various mothering styles of earth don't see that part. They only see him taking out the garbage somewhat reluctantly when asked. His ability to obey his mother is what makes her very attractive to the sentient creatures living under surface of Mars. Every 25 years their hatch-lings arrive and they need someone to mother them.

Director Simon Wells wrote with Wendy Wells from a book by Berkeley Breathed a very imaginative adventure that will give kids a better appreciation of their moms. Milo's body movements are acted by Seth Green but his voice was considered too mature so the voice over is by Seth Dusky. (Because a 32 year old man can move like a child, but can't sound like one). Joan Cusack is the mom who is abducted while asleep by aliens. Milo witnesses the kidnapping and while attempting to rescue her is also captured. Milo manages to escape with the help of an underground earth-man Gribble (Dan Fogler) who wants to keep Milo to be his new best friend. He had also stowed away when his mom was taken many years ago. Now he's a man-child who survived on the trash level of the Martian habitat. The furry male counterparts of the all female population in the civilized areas have also been regulated to the trash heaps. Their happy huggy personalities are in direct contrast to the strict military like opposite sex who control their world. The elder of the population called the Supervisor (Mindy Sterling) want to download a mom's maternal skills into robot nannies. Unfortunately the process is fatal. Despite Gribble's attempts to thwart Milo while he tries to find his mom, Milo finds an ally a hippie influenced tagger Ki (Elisabeth Harnois) who paints random surfaces with colorful flowers. Apparently her downloaded mom was from the 60's.

If you stay for the closing credits you can get a glimpse at the motion capture process used for creating the animated characters using the real actors covered in little dots. This is the same process used for Polar Express and the technology has vastly improved since then. There is a lot of chasing and falling, curious legged biped aliens who can breath underground but not on the surface. It's not exactly laugh out loud, and the loss of Gribble's mom is downright sad. The kids will enjoy it, and if mom's get a hug afterwards, then the ticket price is well spent.
(Review by reesa)

Posted by Dallas Movie Screenings at 12:07 AM