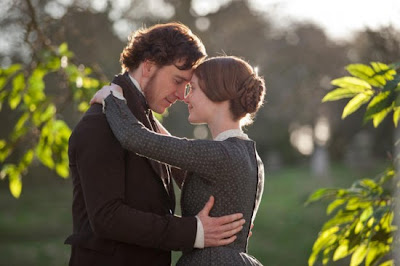 Charlotte Brontë 1847 gothic story of a plain English governess who falls in love with the mysterious Bryonic Edward Rochester has spurred over 36 movies, radio, musical and TV versions since 1910. This time the film directed by Cary Fukunaga (Sin Nombre) and screenwriter Moira Buffini (Tamara Drewe) have pared down the very detailed novel to a moody atmospheric plea for Jane's struggle to be treated like a independent human being.

The story opens with Jane (Mia Wasikowska) running away from from Thornfield Hall, getting caught in a storm on the moors. She is taken in by a brother and his sisters who nurse her back to health. St. John Rivers finds her a job teaching the local farmers daughters. The story then flashes back on how Jane came to be where she is now. As an orphaned child she was kicked out of her aunts home and sent to a charity school where she is accused of being decitful. Her sense of self worth is evident then as she does not back down from the attitude and self-righteous clergyman who runs the school. Her only friend Helen passes away from consumption. Somehow Jane survives the abuse at school and the loneliness, the movie doesn't really explain. Years later Jane receives the offer of a job teaching a French child at the estate of Thornfield Hall. Mrs. Fairfax (Judi Dench) the head housekeeper keeps the rooms ever ready as she never knows when Edward Rochester (Michael Fassbender) will be home. For once Jane feels comfortable and happy with her surroundings, despite the creepy noises that are coming from a wing of the sprawling mansion. When the dashing Mr. Rochester does come home her confidence and ability to speak her mind sparks his interest. Despite the slow build up Mr. Rochester with his swoon worthy eyes finds in Jane salvation from whatever it is that keeps him away from his home. They decide to wed, but soon that thump in the night becomes a fire in house, a person being shot, and Jane running away across the moors. She meets up with the River family and soon the brother (Jamie Bell) wants Jane to marry him and become a missionary wife. When Jane can't get Mr. Rochester out of her head, she returns only to find Thornfield burned to the ground.

Wasikowska is strong as the emotionally controlled Jane. Her Victorian era costumes with the many layered and corseted clothing in gray and her tawny hair in loose braids wrapped around her head is in direct contrast to Jane's curious and open mind. Fassbender is brooding and yet romantic. It's unfortunate that the chemistry between the two is somewhat lacking. Jane is so repressed that her surrender to Mr. Rochester's soulful glance is lacking. It was hard to believe that they fell in love so quickly. Where's the passion? It's still a movie worth watching even for whatever Brontë's feminist message may have been at the time. In the end Jane still goes back to the rich guy.
(Review by reesa)