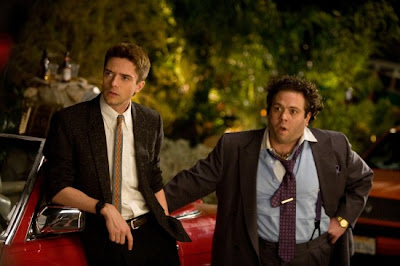 Affable Topher Grace plays Matt Franklin a recent MIT graduate who is unsure of what to do with his life while living in San Fernando Valley with his parents. Instead of using his degree in engineering he is working at a Suncoast Video store back in those days of VHS tapes. When Tori his blond prom queen high school crush comes in he pretends that he is working with banker Goldman Sachs to impress her. She works in banking too so she invites him to a party. Matt with his manic friend Barry head out for night of 80's party hardiness.

Matt's father Bill (Michael Biehn) is a uniform cop and is highly disappointed that his son's expensive education has not directed him to a better career than a video store. Why couldn't he be more his his twin sister Wendy (Anna Faris) who is contemplating a graduate program in England. But she is feeling hesitant because her jerk boyfriend Kyle (Christ Pratt) wants to get married.. He's a typical 80's jock who has an annual end of the year freaky party that is the mainstay of all movies of this genre. You know the house full young adults, drinking, drugging, with music blaring. Matt “borrows” a flashy convertible from the car dealership from which he was just fired so Matt can impress Tori. Tori invites him to party with her financial co-workers where she fends off unwanted advances from her boss. Naturally Matt's lies catch up with him and his cathartic moment is played out in front of a large group of people.

Originally called Kids in America it was directed by Michael Dowse of the Fubar movies and written by Jackie and Jeff Filgo who also did the 70's show. It took four years to be released mostly due to the use of drugs displayed in the story before Ron Howard and Brian Glazer of Imagine Entertainment came to the rescue. Even though the filmmakers wanted to portray a movie made in the 80's rather than a parody, it still comes off as episodic. It has all the elements of the time period with a killer playlist soundtrack, but doesn't have the character charm or development that's evident in a John Hughes movie. Topher has that likable, boyish quality with puppy eyes but at times he was looking a little too old to play someone in his early 20's. (He's now 32). Dan Fogler has some amusing moments that involve cocaine and an older woman but he's basically the Stan Laurel to Topher's Oliver Hardy with killer dance moves. It was great seeing Michael Biehn my 80's movie hero show up and wished he had more to do. If this is your generation you may enjoy this night at the movies.
(Review by reesa)