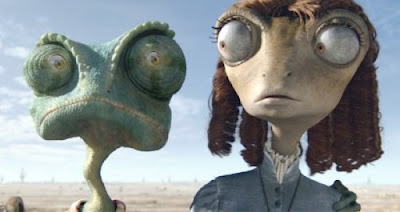 Johnny Depp voices a chameleon who spent his life as a pet in a terrarium is suddenly thrust into the real world when his tank falls out of a moving car crashing on a busy road in the desert. The shock of his predicament is tempered by an armadillo that offers sage advise to continue on this journey of life.

Thirsty and tired he meets a young iguana called Beans (Isla Fisher) who takes him to the town of Dirt, a dry dusty collection of run down building with and assortment of desert creatures. At the local bar, the chameleon who had only himself to entertain all his life, uses that imagination to redefine himself as a hero who took down a bunch of bad guys with one bullet. He christens himself Rango. The townsfolk buy into this story and the town mayor (Ned Beatty) gives him the job of sheriff. The ego boost is short lived when it's pointed out the local graveyard is full of former good guys. The most precious resource to be protected is the small amount of water in the bank. When the bank is robbed, Rango must make his boasts turn into reality.

A-list director Gore Verbinski who directed the Pirates of the Caribbean teams again with Johnny Depp as the over confident chameleon. The script by John Logan is peppered with one liners that parents and older teens would find amusing, but will be lost on younger kids. The highly realistic quality of the digitally animated film is the first ever by Industrial Light and Magic. Instead of the actors just recording their lines in and empty sound studio, Verbinski had the ensemble perform physically on a tinker toy set so the animators could study their nuances, body language and eyes. Visually the film is a technical achievement.

It's too bad the overall story and dialogue leave the movie as dry and dusty as Dirt. You may spend too much time trying to figure out which celebrity is voicing the characters which include Abigail Breslin as Priscilla a little girl whose comments shoot straight from the hip, Alfred Molina as the tire treaded armadillo Roadkill, Bill Nighy as Rattlesnake Jake, Harry Dean Stanton as Balthazar, Ray Winstone as Bad Bill, and Timothy Olyphant channeling Clint Eastwood as the Spirit of the West. The story is held together by a Greek chorus of owls with guitars singing the introductions to the chapters of Rango's adventure. There is an environmental theme of whoever controls the water controls the world, and the impact of large cities on the eco system of the surrounding areas and wild life. Which probably looked better on the page but will be lost on the kids. At least you will not find any cuddly cute desert creatures that will turn into a line of fluffy products.
(Review by reesa)