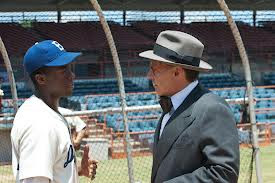 This is an old school hero worship movie of Jackie Robinson, the baseball player who broke the major league's color line back 1945. Amazingly many people are not aware that baseball for profit was played only by whites. Written and directed by Brian Helgeland (The Knight's Tale), the story covers the early years of Robinson's career of breaking into the Brooklyn Dodgers. It's filled with flag waving and basically one note biographical saga of his historic journey.

Branch Rickey (Harrison Ford) is the general manager of the Brooklyn Dodgers. He stuns his staff by announcing that he wants to recruit a player from the Negro Leagues. After all baseball is a business and to generate money, they need to shakes things up and bring in new and skilled players. They settle on Jackie Robinson (Chadwick Boseman), who may not be the most skilled player they considered, but seemed the most likely to endure the onslaught of criticism that would come his way. He was from California, went to UCLA and was an officer during the war. They don't mention that UCLA had the most integrated sports program of anywhere in the US or that he was known for his quick temper that earned him an Army court martial. His soon to be wife Rachel (Nicole Beharie) is a bright, well educated and supportive modern woman. She even uses the “white only” bathroom at the airport which gets them kicked off their plane.

Robinson starts in the Montreal team to show his worth. Needless to say, team members are not all on board with his inclusion to their ranks. But he quickly shows that he's a wiz at hitting, and stealing bases. Rickey tells his Dodgers manager the legendary Leo Durocher (Christopher Meloni) to make sure the other players quickly accept playing with Robinson. Pee Wee Reese (Lucas Black) early on shows some solidarity with Robinson when he sees the game improve with his skills. Announcer Red Barber (John C. McGinley) narrates the play by play on the field in his perfect period inflections. Andre Holland plays Wendell Smith the sportswriter who was Robinson's companion during his days in Montreal giving voice to the importance of what was happening in baseball.

The movie only tells Robinson's story through the work of Branch Rickey who like a tough love father figure braces his player through the tough moments. Ford is an almost unrecognizable caricature with all the good lines. This main issue of the movie is racism. It's a not so subtle reminder of how much farther we have come now that we have an African American President in the White House. But also have far we haven't come with the level of racism that is still prevalent in this country. There is one scene where a child is imitating the racial slurs of his parent, but later can't deny the talent of Robinson and changes his attitude. It will still take several generations before this world can fully enjoy a color blind society.

You can always read Robinson's 1972 autobiography if you want a more complete truth about the complicated man and his views of the actual events. As a biopic, this is like a Disney version of 20th century heroism in breaking the color barrier of major league sports. The glossed over production is designed to make one leave the theater feeling good, righteous and ready to watch a baseball game. So that can't be too bad, right?
(Review by reesa)

Email ThisBlogThis!Share to TwitterShare to FacebookShare to Pinterest
Labels: 42 review