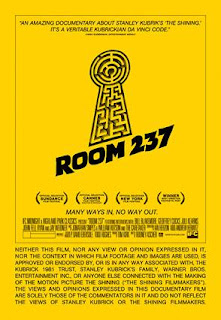 Enter Room 237 with caution. This documentary portents to deliver the hidden meanings of Stanley Kubrick’s The Shining. Certainly there are mysteries to discuss and ponder within this 1980 classic horror classic from one of cinema’s masters. But what Rodney Ascher‘s 90 minute reverie delivers are mostly head-scratchers and dubious points that could make any viewer want to shout back, “Enough” or “Are you kidding me?”
Granted, some fun can be found here - incredulous laughter! And it’s nice to see clear, digitally restored images of The Shining (and all the other clips from Kubrick’s classics). If one has lasting memories of the film, seeing this could be a jumping point to return to the original and watch it again. That’s what’s fun about film classics – you never tire of seeing them and because they often work on so many levels, re-watching them can offer new delights. There’s nothing wrong with analyzing why a film works so well.

But these “theorists” (whom we never see, but just hear their musings), beat it to death, go off on weird tangents, and appear to be viewing The Shining from some private, alternate universe. They have these “A Ha” moments and make too much out of them. Yes, a particular poster about skiing may have been selectively placed but I doubt if any deep meaning may be construed. The way Kubrick stacked the Calumet cans probably was a visual treatment, and yes their logo of an Indian certainly connects with the ancient burial grounds that the Overlook Hotel was built on, but this particular narrator seems to see far more meaning than Kubrick may have meant. Another narrator seems to think that Kubrick was referencing deep within The Shining his involvement with NASA – who knew that the footage of 1969’s moon walk was a secret Kubrick endeavor! Kubrick gives us “clues” to this throughout The Shining – yeah, Right!

There’s a good point that films have subliminal images, which works well with the film’s ghostly theme. But they don’t really explore this. What is offered is the supposed image of Kubrick in the clouds as the opening credits end. Gee, I missed it!
I’m not that certain what direction Kubrick was going at when he deviated from the Stephen King book – maybe it’s about the nature of Time, certainly about Madness. And perhaps Ascher’s Room 237 is really a joke poking fun at film theorists. The loony ideas of this film do not convince – but if it makes one want to see The Shining again, then it works on that level.
(Review by David Bacon)