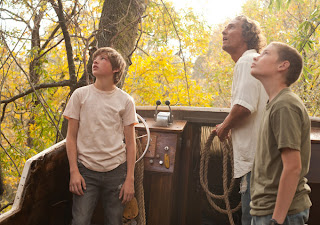 It's been awhile since Matthew McConaughey has shown his dramatic chops that doesn't involve an over the top character like in Magic Mike or Killer Joe. Written and directed by Jeff Nichols the film competed for the Palme d'Or at the 2012 Cannes Film Festival and was shown at the 2013 Sundance Film Festival. This coming of age story has shades of Huck Finn and Treasure Island. A little piece of Americana during the summer in Arkansas along the Mississippi River.

Ellis (Tye Sheridan) lives in a funky houseboat with his soon to divorce parents (Sarah Paulson and Ray McKinnon). His best friend Neckbone (Jacob Lofland) lives with his oyster diving uncle Galen (Michael Shannon) who fancies himself a playboy. The boys had discovered a boat caught up in a tree on a deserted river island and plan to claim it as their own. But when they go there they find evidence that someone may be living in it. They stumble upon a grizzled Mud (McConaughey) who gets the boys to bring him food and water with the promise that he will let them have the boat once he's done.

While Mud represents a danger, he's also charismatic in his laid back straight talking attitude with the boys. They later find out that he's hiding there after killing a man who was abusing this long time sweetheart Juniper (Reese Witherspoon). She is supposed to meet him in town soon, so he's just waiting for time. Not only are the police after Mud there's bounty hunters in town hired by the father (Joe Don Baker) and brother of the murdered man who trying to track down Mud by keeping an eye on Juniper.

Ellis becomes the messenger between Mud and Juniper. His impressionable young mind carries a romantic fascination as the undying love story that Mud relays is a distraction from his embattled parents. He hangs on to Mud's belief that Juniper and he are meant to be, but soon finds that she also has some secrets. Even his mysterious neighbor on the river Tom Blankenship (Sam Shepard) who knows Mud, may or may not be Mud's father and could have been a government hit man.

The 14 year old Ellis also develops a crush on a high school girl who, as all teenage girls do, messes with his head that leads him to some serious heart ache. Ellis is tough, sensitive and ever watchful. He realizes that not everything that adults tell him are the entire truth. You can see how the events are changing the young man's life by the confidence and wariness displayed in eyes. His parents so increasing self involved in their own dramas fail to comprehend the effect they have on their son.

The performances, particularly by the two boys is what keeps this movie falling into the same traps of the typical coming of age movies. There's humor, but more real life ridiculousness rather than set up jokes and stunts. McConaughey probably gives one of the best portrayals in years reminding us of those John Grisham days when he was the next big thing. If there's a movie to see this year, this may be the one.
(Review by reesa)

Posted by Dallas Movie Screenings at 12:36 AM