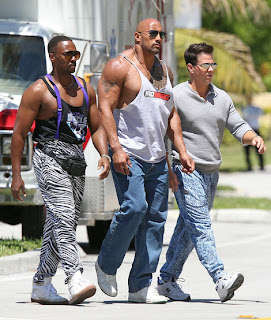 It's amazing that other directors are doing “Michael Bay” movies while Michael Bay is doing Pain & Gain. The extremely dark comedy was written by Christopher Markus and Stephen McFeely based on a 1999 Miami New Times series of articles about the brutal kidnapping, extortion, torture and murder by an organized group that included a number of body builders. The Sun Gym Gang in reality are sitting on death row in Florida. If this movie is anywhere near to what really happened it's a good object lesson on what steroids and coke can do to a stupid person's mind.

Mark Wahlberg is Danny Lugo a personal trainer at Sun Gym who is sick of being poor. After attending a get rich seminar by Johnny Wu (Ken Jeong), he decides to become a “doer”. Unfortunately his limited brain power only goes as far as concocting a plot to steal away the fortune of one of his annoying clients Victor Kershaw (Tony Shalhoub). He recruits his fellow worker Adrian (Anthony Mackie) who wants a specific medical treatment for his erectile dysfunction due to his steroid abuse. To make the team complete he brings in Paul Doyle (Dwayne Johnson) a recovering coke head who just got out of prison. The plan is to kidnap Victor and get him to sign over all his assets to them. Danny's plans sound better than the actual execution. The three dimwits are faced with an adversary who has survived living in Columbia and holds out for weeks while the trio tortures him. Even attempts to kill him miserably fail. Victor tries to get the police after the trio, but his story is so fantastic that no one believes him. He hires ex detective Ed Du Bois (Ed Harris) who doesn't quite believe him either. But when the gang goes through their ill gotten gains quickly they target porn king Frank Grin (Michael Rispoli) and thats when they truly over play their hands.

First of all this movie is way too long. Secondly, there's not really one likable character in the whole movie, except maybe Ed Harris. Danny is full of ideas that he plays out his scenarios like action movies, Adrian falls in love with the nurse at the clinic (Rebel Wilson) having a thing of plus-size women, and Paul who has that recovery born again fervor doesn't let that get in the way of his addiction when he's got money to burn. The funniest moments involve the gang having a neighborhood watch party in Victor's old house. Several people walked out during the advanced screening when the gang decides to dismember some of their victims. Nothing is shown, but it's still kind of grisly. There are some really amusing moments, but mostly from all the pain the audience has to endure during this movie, there's really nothing to gain.
(Review by reesa)

Email ThisBlogThis!Share to TwitterShare to FacebookShare to Pinterest
Labels: Pain and Gain review