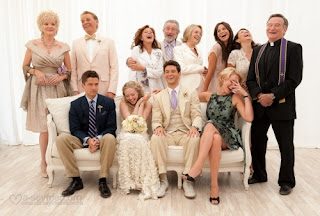 It never fails that these movies that center on a wedding of two impossibly cute people are always located on these beautiful estates, are catered events in tents on the lawns, with guests staying in the multiple rooms within. Everyone is genetically blessed, have good successful jobs, and have nothing else to worry about than their own personal dramas. That being said, director/writer Justin Zackham based his version of 2006 French film Mon frère se marie written by Jean-Stéphane Bron and Karine Sudan that stars a large ensemble of very competent actors who do their best to sell the story.

Long divorced Ellie and Don Griffin (Diane Keaton and Robert Di Niro) unite for the wedding of their Columbian adopted son Alejandro (Ben Barnes). Don has been living with his girlfriend (and Ellie best friend) BeBe (Susan Sarandon) for the past 10 years. Alejandro's Catholic bio-mom and sister (Patricial Rae and Ana Ayora) is flying in from Columbia for the wedding. Alex asks his parents if they would pretend to be still married as his bio-mom considers divorce to be a huge sin. This obviously peeves BeBe who moves her stuff out of the house to help with the farce. The plot obviously snowballs into all sorts of unexpected shenanigans.

Intertwined are the stories of the other siblings and friends. Lyla (Katherine Heigl) is a lawyer who just had a huge fight with her husband who she walked out on to come home to the wedding. While visiting her maternity doctor brother Jared (Topher Grace) she faints when she sees a baby. Lyla has a lot of anger directed at her father. Jared is 29 and still single and still a virgin while waiting for the perfect moment to lose it. His stance is taken aback when is future sister in law Nuria does a skinny dip in the family pond and gives him a hand job during the rehearsal dinner (!). Missy (Amanda Seyfried), the bride to be, is the daughter of Muffin (Christine Ebersole) and Barry (David Rasche) who despite their smiles are worried that because of Alex's South American heritage that they will have “beige” babies.

All the craziness is helped by having a good cast. Robert Di Niro in comic form as the sculptor Don who thinks he's all that to his 1rst and 2nd women in his life. Don endures most of the slapstick by constantly being slapped and puked on. Keaton plays pretty much the same character in most of her movies, and you can expect no less here. She and Susan Sarandon manage to give their characters a mature and friendly attitude with their complicated love life without resorting to cattiness. Everyone is so civilized. On top of all this Robin Williams plays the local priest who is on the wagon and presides at the wedding ceremony.

There's a lot going on in this and it's really nothing new. The French version would probably play better. But for now, this is the yearly wedding movie that usually comes out at this time of year for those wedding planning tie in's. Check your brain at the door, and just have fun with it.
(Review by reesa)

Email ThisBlogThis!Share to TwitterShare to FacebookShare to Pinterest
Labels: The Big Wedding