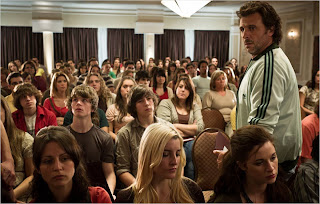 This movie is for all those young men who offered their body fluids at a sperm bank to help impregnate women and often wondered what happened after that. The most successful Quebec made movie directed by Ken Scott who also wrote the script with Martin Petit was filmed in 2011. It finally makes it to the American screens. The movie was also made into an Indian Bollywood version and an English version being released later this year will be called The Delivery Man starring Vince Vaughn. But please by all means see the French Canadian film with English subtitles first. You won't be sorry.

Starbuck is the pseudonym for the anonymous donor of 683 vials that were successfully used to create 533 children between the years of 1988-1990. About 142 of them decided to file a class action suit with the clinic to reveal the identity of the donor. A lawyer shows up to let David (Patrick Huard) who is now 42 years old, know what his prolific donations had wrought. He hands him an envelope with profiles of the children that are looking for him. David, who works driving the delivery truck for his father's butcher shop is not exactly thrilled with this news. He's got his own problems being $80,000 in debt to loan sharks and his girlfriend Valérie (Julie LeBreton) who is angry at him for taking her for granted is pregnant.

His best friend (Antoine Bertrand) decides to get his lawyer license again to represent him to keep the records sealed. Curiosity gets the better of him and David decides to look at just one of the children in the envelope. It fills him with pride to discover that the young man is a talented soccer player. Slowly he begins to stalk each young person and gifting them with a random act of kindness. It really hits home when he follows one young man and ends up at a meeting for the people involved in the lawsuit and he can see all the faces of his progeny. Before he could identify himself, his father is attacked by his loan sharks. He decides to go with the counter suit to keep his his name from being publicized.

Patrick Huard plays the hapless David with a sweet affability. Even his family is always forgiving David for his mishaps, missteps, and constant mistakes. His father gives him the easiest job at the business, but he can't even do that right. His brothers tease him horrendously but he has a close loving family. Even his cop girlfriend can't stay angry at him long enough even after finding out his secret identity. David's transformation from an irresponsible airhead to a man ready to stand up to the bad media coverage of his Starbuck image. It's an improbable story, but that is so full of heart, that you will walk out smiling.
(Review by reesa)

Posted by Dallas Movie Screenings at 1:08 AM