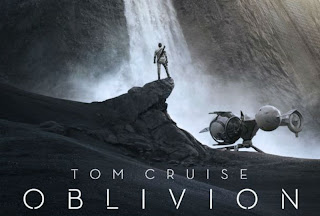 Do the people who create these big budget movies throwing little slips of paper into a hat filled with various rehashed ideas, then take the handful of chits and decide to build a story from it? This new science fiction epic by Tron: Legacy director Joseph Kosinski wrote the screenplay with Karl Gajdusek and Michael Arndt based on a Kosinski's unpublished graphic novel. There's a little bit of Wall-E, Star Wars, the Matrix Revolution, a touch of Planet of the Apes and probably others. The IMAX format offers the sound and feel for the big moments, and visually the movie is quite stunning. But for all the FX and wonderment has totally replaced the character development necessary to become emotionally involved with the story.

Earth in 2077, it's been said the world has been destroyed by alien scavengers (Scavs) which destroyed the moon and pretty much made a mess of things when the earth shook and the ocean rose. The survivors were sent to Saturn's moon Titan. On earth, Jack Harper, also known as Tech 49, works from a glass and concrete tower with his communications officer Victoria (Andrea Riseborough) dressed in stylish clothes and high heels office wear. She gets her orders via a video link with their commander Sally (Melissa Leo with a huge southern fried accent) who is at the orbiting space station known as the Tet. They only have 2 weeks left of duty before they are promised to be returned to Titan. From the base of their operations, Jack flies this orbital craft, which deserves it's own movie. He repairs the drones that protect the huge water extractions units. Several drones have been hijacked and their fuel cells taken probably due to the remaining Scavs.

Jack has been having recurring dreams that feel more real than a dream. They are visions of life in New York's empire state building observation tower and a beautiful unknown woman (Olga Kurylenko). It's then vexing to him when a spaceship crashes on earth and the rescue pods are carrying sleeping humans. He manages to save one pod from the drones which for some reason are destroying them. The one he saves turns out to be the woman from his dreams. If this isn't confusing enough, they are captured by the Scavs who also turn out to be something he wasn't expecting. Their leader Malcolm Beech (Morgan Freeman) who tells Jack to go beyond the radiation zone to find the answers.

This film is really appealing to the eye. It's just a matter of accepting Tom Cruise, whose tabloid public image often over powers our ability to believe his immersion in his character. The romantic element is the only heart in the narrative. It would have been nice to see some exploration of Scavs and how they survived. How they never found the secret lush valley that Jack has hidden away as his retreat from the sterile Tech Station with Victoria. But those are moot points. The story moves along, although the details of the cataclysm are a bit murky as to why and how. The big reveal at the end is not really surprising and it's tied up neatly if somewhat expected. For an early venture into the summer movie season which usually kicks off with Iron Man 3, it's a nice diversion until then.
(Review by reesa)

Posted by Dallas Movie Screenings at 12:10 AM