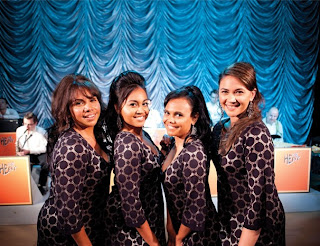 Martin Luther King's civil rights movement in the US had a strong impact on the rest of the world. Especially in Australia where the aboriginal people were not considered human and classified under flora and fauna. The factoids at the beginning of the movie sets up the mindset of the ruling white class prevalent in the late 60's where “blacks” were not welcome. The film is directed by Wayne Blair and written by Keith Thompson and Tony Briggs who had written the story as a musical play based on the adventures of his mother and aunt. They had gone to Vietnam performing as backing singers for a New Zealand Maori band.

Gail (Deborah Mailman who played Cynthia in the play) and Cynthia (Miranda Tapsell) want to go to town for the singing contest offered by the local pub. People who live in the reserve are not welcoming although their country western tune is beautifully performed, it's no surprise that the prize goes to the white girl. Dave Lovelace (Chris O'Dowd), the MC and piano accompanist is impressed by their talent. Especially when Julie (Jessica Mauboy) joins the girls on stage. She shows Dave an ad from the newspaper for an audition for performers to entertain the troops in Vietnam. Dave suggests they do soul music which changed his life. The girls used to sing together as children and they want to bring back their light skinned cousin Kay (Shari Sebbens) who was taken away as a child to live with a white family. Together they learn to dance, and create a routine under Dave's tutelage.

Dave and Gail have a tempestuous relationship. She's tough as nails to everyone including her sisters and cousin. She's strong willed and opinionated as Dave is laid back, honest and sarcastic. Cynthia thinks that she's on the road to fame and fortune. Julie, the youngest, left her son in the family's care. And Kay hopes to mend the awkwardness of living back with her cousins after being indoctrinated into the white world. The music is what makes this movie come alive. The classic songs and their quirky late 60's costumes are spot on. There are some cliché situations with the girls falling in love with some of the soldiers, battling egos, and the constant reminders of racism everywhere. But the journey with the band is held together by the clever dialogue and the energetic performances of the really positive portrayals of the young women. It's not as slick and over produced like Dream Girls, but if you liked The Commitments, you will enjoy and afternoon with The Sapphires.
(Review by reesa

Email ThisBlogThis!Share to TwitterShare to FacebookShare to Pinterest
Labels: The Sapphires review