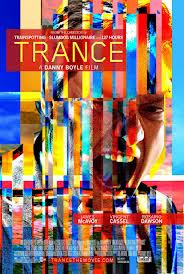 Director Danny Boyle's new film from the screenplay by Joe Ahearne and John Hodge is a layered Inception type of plot that makes one question what is real and what is a post hypnotic suggestion. There's all sorts of twists and turns that are determined to befuddle with facts and fantasy that is eventually revealed at the end if you haven't guessed it by then.

James McAvoy and his amazing blue eyes plays Simon who works in an art auction house. At one time art heists were fairly common so employees are always advised not to be a hero and let the thieves take the art. It's not worth getting killed over it. But as modern times bring high tech methods of averting crimes, it also means the criminals are just as quick as to change with the times. During one such assault during an auction of Goya's painting of “Witches in the Air”, Simon does as he's trained. Get the art out of the room and secure it with his accompanying guards. He almost gets away when he's confronted by one of the thieves who knocks him out. Simon suffers amnesia and can't remember where he put the multi-million dollar canvas.

Through a series of flashbacks it seems that Simon was indeed part of the plan. He had a serious gambling problem which leads him to be associated with the unsavory lot. The missing painting was not what his cohorts had expected. Since torture doesn't seem to work on him, they bring him to hypnotherapist Elizabeth Lamb (Rosario Dawson). She soon seems to realize that Simon might be forced to go under to find his “keys”. She makes contacts with the gang leader Franck (Vincent Cassel) and is willing to make a deal with him in exchange for her work in finding the missing painting.

The plot seems to run amok with Simon and Franck as Elizabeth weaves her psychobabble on the gang. She makes the gang go under so that Simon will feel trust. She thinks he may be blocking the memory because the gang (Danny Sapani, Matt Cross and Wahab Sheikh) will kill him after he finds the painting. The dynamic of the gang changes through sex, deception, manipulation and greed. Just when you think you are feeling sympathetic towards a character another puzzle piece falls and there's no one you can trust.

The actors are all well cast, particularly Rosario Dawson who not only bares all emotionally but physically too. In fact, the three main stars reveal an ample amount of nudity without it seeming exploitative. Visually the art direction and photography are drenched in dark tones and modern furniture. As in all Boyle movies the soundtrack Rick Smith and the band Underworld works to keep up the suspense. Underworld has worked with Boyle for 17 years and their creative partnership is the best thing about the movie The jumping around from reality to hypnosis will make your head spin. It's definitely trippy and not as great as his other films, but it will keep you mildly entertained.
(Review by reesa)

Posted by Dallas Movie Screenings at 12:35 AM