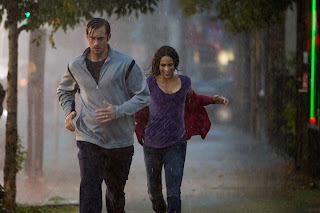 Rich and Lydia Boyd (Jason Bateman and Hope Davis) are a suburban couple in a nice house, but Rich is distracted by doing his law firm business from his phone even at dinner time. His quiet musically inclined son Ben (Jonah Bobo) is withdrawn and bullied at school thinks his father is a jerk. His older sister Abby (Haley Ramm) isn't much help and his mom, although thinks he will get over whatever teenage angst he is going through. When Ben gets a new friend on his Facebook type of page, he blossoms thinking that he's finally found someone. Little does he know that she is a construct of Frye (Avial Bernstein) and Jason (Colin Ford) who are getting their kicks from watching Ben's reactions to their mean spirited sport.

Jason is the son of private detective Mike Dixon (Frank Grillo) who specializes in computer identity theft. He is advising Cindy and Derek Hull (Paula Patton and Alexander Skarsgård) who are the victims of a hacker who emptied out their bank account. The couple is going through a rough patch after the death of their baby. Cindy's grief chat room buddy Stephen Schumacher (Michael Nygvist) looks like the likely source from the investigation so far. So they decide to stalk and confront him. In the process they are forced to re-engage in their relationship with each other.

Nina Dunham (Andrea Riseborough) is a reporter for the local news who wants to break away from doing light pieces. She visited an online chat sex worker Kyle (Max Thieriot) who turns out to be underage and talks him into telling his story. Harvey (designer Marc Jacobs in his debut acting role) is the “pimp” who recruits the homeless teens and sets them up. Nina's report comes under the radar of federal law enforcement. She is confronted by the question of who is using who.

The last act of the film is the final confrontation of the various stories after a slow but mesmerizing build up. Especially when Mike discovers his son's culpability in Ben's tragedy. Rich and Mike have to examine their own parenting skills while trying to protect their kids. The movie is upsetting, and somewhat of an ultimate downer. But it will be one that will have you looking at your own disconnections in life with the people around you. Isn't it time you put your phone down and maybe look someone in the eye and have a real conversation?
(Review by reesa)