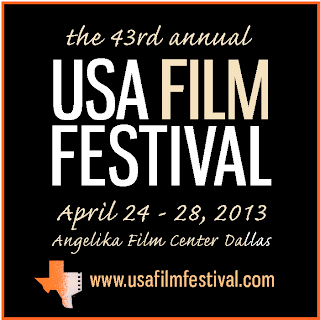 This year’s program highlights include:

- Caesar Must Die from Paolo and Vittorio Taviani

- Feature debuts from Lake Bell (In a World...) and Lance Edmands (Bluebird)

- Japanese anime feature The Princess and the Pilot

Texas ties – films from some of our favorite hometown filmmakers:
- Stephen Tobolowsky hosts a program of short films and filmmakers including veteran character
actor Jim Beaver with Night Riders

- Actress Amy Acker presents Joss Whedon’s Much Ado About Nothing

TICKET & SCHEDULE INFORMATION
Tickets for all programs are $10.
There are also several FREE admission programs noted in the schedule.
Advance tickets will be available via Ticketmaster beginning April 15 at 10am.
Tickets by telephone – 214-631-2787
Tickets online – www.ticketmaster.com


A complete schedule of all Festival events may be obtained by calling the Festival office at
214-821-FILM or may be viewed online at www.usafilmfestival.com
Printed schedules are also available for pick up at the Angelika Film Center Dallas.

ABOUT THE USA FILM FESTIVAL
A year-round film festival featuring 50 days of programs
The USA Film Festival is a 43-year-old Dallas-based 501c3 non-profit organization dedicated to
the recognition and promotion of excellence in the film and video arts. Year-round events
include KidFilm®; Dallas’ only official Oscar® Experience program; an Academy-qualified
National Short Film Competition; monthly screenings; special programs and premieres; and the
USA Film Festival, held each spring. Throughout the year, the Festival presents a variety of
membership, exhibition, educational, and cultural programs designed to bring together audiences
and filmmakers for a “live cinema” experience.


For information on the USA Film Festival you can contact
usafilmfest@aol.com
214-821-6300