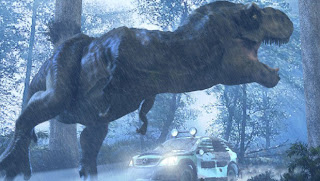 Hard to believe that it's been 20 years since the release of Jurassic Park in 1993. The dinosaur epic which was based on the book by Michael Crichton who also did the screenplay with David Koepp and was directed by Steven Spielberg. To celebrate the anniversary, the movie was released enhanced by the power of 3D. The movie remains as fascinating and edge of your seat exciting as it did when it opened. If any movie deserved to be redone in state of the art 3D in a digital format, Jurassic Park was the perfect choice.

FX back in 1993 was great at the time, but by today's standards it's quite primitive now. But the dinosaurs still look great. After while you don't seem to notice it, and one wishes that the giant prehistoric creatures would jump out of the screen to more effect. It's the movie that still holds up and is more appreciated being 20 years older. This will whet one's appetite for Jurassic Park 4 in 3D due to the big screen in 2014.
(Review by reesa)