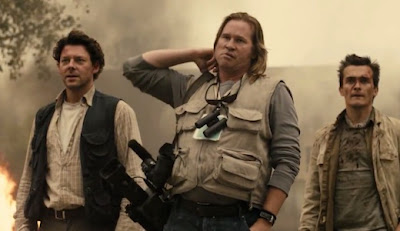 “The first casualty of war is truth.” Hiram Johnson US Senate 1918

In 2008 a swift and devastating 5 day war broke out between Russian the Georgia Republic. Based on true events, director Renny Harlin centers the story of a renegade American journalist, his cameraman and a beautiful Georgia native who are embroiled in the escalating war.

Thomas Anders (Rupert Friend) who just lost a colleague in Iraq soon goes to Georgia on the advice of a Dutch journalist “Dutchman” (Val Kilmer) along with his cameraman Sebastian Ganz (Richard Coyle). On the way to meet the Dutchman, they stop by a village restaurant with a wedding party celebration. Suddenly jets fly overhead bombing the village. Anders helps the American sister of the bride,Tatia (Emmanuelle Chirqui), then tries to help the wounded in the aftermath getting the serious ones to the only hospital in the area. The global networks are covering the Olympics and the news bytes recorded on scene are not going to be used. Only the Russian side is being reported. The Georgia side is completely ignored. Tatia wants to go back to her relatives, so Anders decide to travel back to Georgia with her. The Russian soldiers give them an escort close to the Georgian border, then travel by car the rest of the way looking for Taia's family.

Andy Garcia plays the Georgian President who argues with the Bush presidential aide Chris Bailot when help from the US is not forthcoming. The events leading up to the war are briefly told mostly though news reports. Since the news is slanted to the Russian point of view, Anders reports on the events from the other side through the eyes of the local people. The helicopters tanks and manpower invading the another village while the local population are rounded up murdered, women raped, livestock and food taken while the village is bombed. Hiding watching from afar while Sebastian records the atrocities. The memory card becomes the object that causes some hostage situations as the perpetrators do not want the evidence of their misdeeds broadcast. But that doesn't seem to be a problem since Anders can't get his bosses to interested enough to air it.

Based on a screenplay by David Battle with Mikko Alanne, director Harlin is able to bring the action sequences his usual stamp of excitement. The Russian Georgia war is a good subject that has not been covered in feature films. But there is a certain obvious pro Georgian anti Russian propaganda going on. Generally the political maneuvering are uninteresting and muddled. The war violence is horrific as the Russian wreck havoc on the peaceful villagers. Rupert Friend is a good actor in other work like Young Victoria is totally unlikeable here as the journalist who takes risks because of his troubled past. The other Americans like Val Kilmer are totally wasted. Kilmer gets top billing but doesn't have much screen time. There's the stereotypical Russian brutish bad guy who loves torture. There's the father who sells out to protect himself. Wish this film had a better story because it's hard to tell if this an action movie or a political one? Neither plays out effectively. Nor does it have characters we care about that even a romance between Tatia and Anders couldn't fix. The only nice part was the photography of the countryside which would have made a nice travelogue if not for the tanks and explosions.
(Review by reesa)

Email ThisBlogThis!Share to TwitterShare to FacebookShare to Pinterest
Labels: 5 Days of War