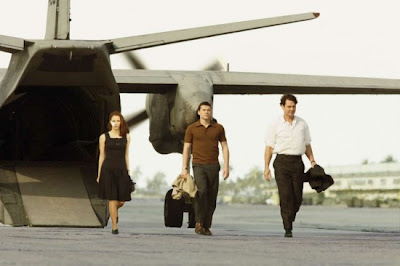 In 1966 three Mossad agents meet up in East Berlin to capture a Nazi war criminal who performed horrific experiments in the camps. The film moves back and forth in time as it explores what happened to those agents after their mission. Directed by John Madden and written by Matthew Vaughn, Jane Goldman and Peter Straughan it is a remake of an Israeli movie of the same name. At times an intense edge of your seat thriller with surprising twists but it is also hard to keep track of which older actor is playing which character from the past.

Rachel (Helen Mirren) is the subject of her daughter's book about the events that occurred in East Berlin that had made them heroes in Israel. Her daughter tells the celebratory audience that her mother did not contribute to the story and that it came from interviews with her father Stefan (Tom Wilkinson) who was also a participant at the time. The books tells of the meeting in East Berlin when 25 year old Rachel (Jessica Chastain) on her first operational assignment pretends to be the wife of David (Sam Worthington). Stefan (Marton Csokas) is the leader running the operations from a dismal flat where they practice Krav Maga the Mossad fighting style with each other, impressed with Rachel's proficiency. Each of the three agents have a history of family tragedy in the Holocaust involving their families. It is this debt to their loved ones that made them volunteer for this mission. However living in such close quarters with only each other for company causes a sexual triangle to grow. David the quiet one is very attracted to Rachel, but he's too professional to let that get in the way. Where as Stefan has no problem taking advantage of Rachel who is hurt and confused by David's refusal of her advances. David accompanies Rachel to a gynecologist Doktor Bernhardt (Jesper Christensen) for infertility problems to secretly take pictures of the doctor. When they get confirmation that it is indeed the Nazi Dieter Vogel they get the mission “go”. They make plans to kidnap him and get him across the border to stand trial in Israel. Even the best laid plans can go amiss and they are forced to keep the doctor captive until further orders. Trapped in the house with the cagey and unrepentant doctor playing games with their minds sets up a series of events that haunt them for the rest of their lives.

There seems to be some issue with time. Rachel was supposed to be 25 at the time of the mission so if 30 years had passed it would make her 55 for the future Rachel. Mirren looks great for her age, but she's clearly older. Another disconnect was having different actors playing the older and younger characters was confusing as Ciarán Hinds plays Sam Worthington's David 30 years older even though he's taller and has darker hair. Helen and Jessica sports a scar on Rachel's cheek so it's easier to accept as Rachel. Wilkinson and Csokas are acceptable as the older and younger Stefan. Helen Mirren has proved to be an action star in RED, and in The Debt she shows off her hand to hand combat skills. The scene in the last act is worth the price of popcorn even if the guy she's fighting with would have been 95 years old. The tight acting by all involved and the intriguing story keeps your attention throughout even if flipping from past to present doesn't always have a smooth transition.
(Review by reesa)

Email ThisBlogThis!Share to TwitterShare to FacebookShare to Pinterest
Labels: The Debt review