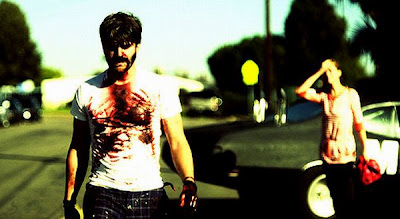 There are times when one is feeling out of touch with today's youth culture when a well touted film loved by the festival crowds completely makes no sense and frustrates this particular viewer. The trailer advertises Road Warrior flame throwers and fast cars then ends up being something else entirely which is more confusing. Director/writer/actor Evan Glodell using a one of a kind camera from vintage camera parts creating a Hipstamatic image that is fascinating to watch even with the purposely distracting dirty lens.

Two friends with the fantasy about living in a post apocalyptic world where they want to be as Lord Humongous and spend their time modifying cars and building flame throwers. They explode propane tanks, torch scarecrows and ride around in their muscle car a ’72 Buick Skylark called Medusa. Evan Glodell plays Woodrow the whiny, annoying part of the duo and Tyler Dawson plays Aiden his annoying crazy friend. The guys don't have any visible means of support. They seem to go through life without any responsibility or purpose than their own amusement. At an outdoor bar Woodrow enters a a contest to eat bugs and is beat by Milly (Jessie Wiseman). After telling her about his flame throwers he asks her out. On their first date he ends up taking her from California to Texas eating at a dirty creepy diner. Milly is a bit of wild child and is enormously impressed with the whiskey dispenser in the car which means a drunken party road trip. This polluted mindset causes Milly to urge Woodrow to trade his car for “Sea Biscut” a Mad Max style motorcycle so they return in time for the birthday party for Courtney (Rebekah Brandes), a friend of Milly. She lives on Bellflower Ave.

The story gets more complicated after Woodrow confesses to Milly that he loves her which spurs infidelities and betrayals. There's a horrific accident and the whole movie goes into a meltdown. Did something really happen or was it a dream? It's amazing living in that world between childhood and adult. That place where one discovers that they have to accept the results of their actions and learn to separate imagination and reality. You won't really find the answer here.

The story is broken up in chapters as we follow the progression and decline of the friendships. While the ads on the posters talk about flame throwers and apocalypse it doesn't really explode with anything as much fun as that. It's more a disintegration of relationships with a couple of aimless young men who only indulge in their immature fantasies. Living a comic book dream.
(Review by reesa)