I don't Know How She Does It 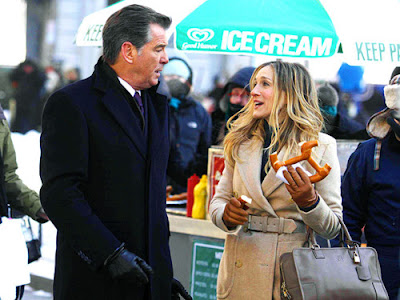 Kate Reddy is a busy working mom trying to balance her demanding job with that of her family. That includes mashing up a store bought dessert in a pie plate to make it look like home made for her daughter's bake sale at school. She and her single mom friend Allison, have to compete with the stay at home wonder women who have all the time in the world to dote on their kids and their personal trainers. Allison Pearson's guilty pleasure 2002 novel which was centered in London was changed to Boston where Kate Reddy's diary entries were changed to interview snippets with various characters.

Kate (Sarah Jessica Parker) lives in what looks like the Beacon Hill area of Boston. Nice brownstones that in reality are multi million dollar town homes. It's like her character from Sex in the City got married, moved to New England to raise a family. She's the same quirky character only now she talks hedge funds and wears more conservative clothes. Her devoted husband Richard (Greg Kinnear) puts up with her constant travel picking up the slack. Kate says that if a choice came down to kicking out her husband or the nanny, she would keep the nanny played by Gossip Girl's Jessica Szohr because good help is hard to find. Her boss Clark (Kelsey Grammer) offers her a chance to work with Jack Abelhammer (Pierce Brosnan) who had read a proposal she had drawn up and he wants to develop it. This means that Kate will have to spend long stretches in New York. It's hard for today's men to keep their wives from pursuing their own careers so Richard gives his blessings. The pressures of her absence weighs on Kate. Even after all these years in the business world there's still an inequality in place between the battle of the sexes. As her mother in law Marla Reddy (Jane Curtin) tells her, men were expected to go to work and women took care of the homefront. Simple and less complicated. Kate is feeling guilty for loving her job and being good at it even though it takes her away from her family.

Rehashing the Supermom syndrome for the umpteenth time could have fallen into the Lifetime TV movie of the week trap. Director Douglas McGrath (Emma and Infamous) and adapted to the screen by Aline Brosh McKenna (The Devil Wears Prada) serves up a strong, contemporary clever script that works well in small doses. It's pretty formulaic with a bit of monogamous romance, that even Jack's confession of attraction to Kate can't falter. The supporting cast have the more interesting roles like Seth Myers as the office tool, Chris Bunce. The best is Olivia Munn as Kate's Jr. analyst and work robot Momo who steals her scenes. Christina Hendricks desperately needs her own staring movie is wasted as Kate's best friend Allison who mostly fills in the little sound bytes on what is to be a woman in today's working world. All women will be able to easily relate to Kate's statistic that 64% of women of small children do not sleep through the night. She creates mental lists of the things that need to be done. As we all know that it's a never ending list that never gets done. So if this film is on your list and you missed it, there's always Redbox.
(Review by reesa)

Email ThisBlogThis!Share to TwitterShare to FacebookShare to Pinterest
Labels: I don't Know How She Does It review