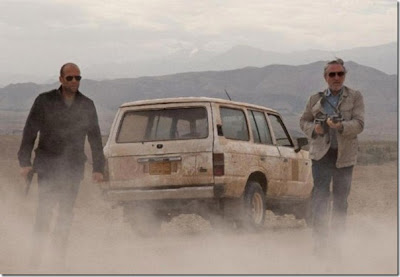 In 1980 Mexico a group of former special force agents are running a hit on a motorcade. Danny and his mentor Hunter have done so many of these kinds of jobs that they are casually eating iguana tacos before the job. One of the shooters after delivering the fatal shot, notices there's a child in the car. The pause causes him to get shot himself. Danny realizes that he's had enough and wants to quit. Based on a true story from the 1991 novel The Feather Men by Sir Ranulph Fiennes is directed by Gary McKendry who also did the screenplay with Matt Sherring.

A year after Mexico, Danny (Jason Statham) is living in a trailer in the Australian countryside and dating a woman from a neighboring farm. One day he gets picture of his former mentor Hunter (Robert De Niro) who has been kidnapped by an oil sheik in a ploy to get Danny who is known to be the best in the business. Two days later he's on a plane to Saudi Arabia. The sheik wants to avenge the deaths of his 3 older sons who were killed by the British Special Forces. Hunter was set up for the job by a broker (Adewale Akinnuoye-Agbaje) who fronts a travel agency for clients who want to contract out black operations and they get a percentage. Danny assembles his old team of Davies (Dominic Purcell) and Meier (Aden Young) . Davies had once tried to get into the SAS but they kicked him out. He uses his personal knowledge to ask around which gets the attention of their former leader Spike (Clive Owen). He takes the information to “The Feather Men”(because their touch is light) a group of businessmen who are ex-SAS and now manipulate key people around the world for their own agenda. Despite Spike's concerns that three former Special Agents are being targeted the committee considers it the price for their long terms goals which is the control of the oil. Spike, like a mad dog without a leash decides to take care of it on his own. Thus begins a cat and mouse game as Danny and company while seeking out their targets, they become targets themselves . Along the way they unearth the reason for hits and how they are all connected.

The book was supposed to be based on actual events but there's been some controversy that the book was fictional masked as historical. In any event it was a good excuse to bring three very masculine actors together to duke it out. Statham actually does a decent job having something to do other than his typical fisticuffs. He's got a love interest in Anne (Yvonne Strahovski) who doesn't understand what he's hiding back on the ranch. She really has nothing to do besides be hostage bait and to make Danny look more human. There's also the weasly younger son (Firass Dirani) of the sheik who you know you can't trust. And it probably was, but for sake of Statham and Owen it's worth the 2 hours. Di Nero has minimal screen time but he makes it up in the end. The cheesy dialogue includes things like “Killing is easy, living is the hard part”. But it goes with the period feeling of the 80's without cell phones or computers tracking everyone's move. There's lots of excitement, some very cool fight scenes and a fairly satisfying ending, but somewhere along the way you may think this has been done before and better.
(Review by reesa)