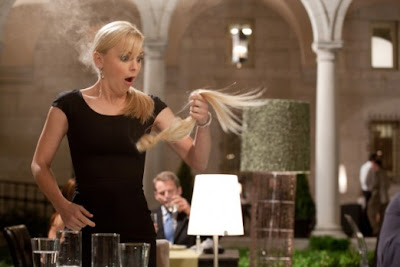 A magazine article states that on average most women sleep with 10.5 men before they find the right one. Ally decides to make a list of her past intimacies and her number turns out to 19, almost double the average. Determined not to sleep with another guy, she plans to make number 20 the last one and the one she will marry.

Anna Faris plays the slightly ditzy and charming Ally who just got fired from her marketing job. Her boss (Joel McHale) who has a weird peccadillo of smelling his fingers which is creepily explained later in the movie turns out to be number 19 after her sister's engagement party. Disgusted with herself she tries to find a loophole by thinking it doesn't count if she re-dates an old boyfriend since she already had sex with him. Her neighbor across the hall offers his help because he comes from a family of cops and knows how to search for people. Colin (Chris Evans) is a bit of a horn dog with a different woman in his apartment each night. He agrees to help Ally in exchange for letting him hide out in her apartment until the overnight guest leaves. They are able to track down several past lovers all with varying results. Like her sister Daisy (Ari Graynor) tells her, there's a reason they are “ex” boyfriends. Her high school prom date is probably the most promising as Jake (Dave Annable) is besides handsome and rich is what her mother (Blythe Danner) considers the best prospect for her. It doesn't take a rocket scientist to figure out which guy is going to turn out to be the right one.

Based on the novel 20 Times A Lady by Karyn Bosnak with the screenplay by Gabrielle Allan and Jennifer Crittenden, it's directed by Mark Mylod better known for helming TV's Entourage and Shameless. Which is probably why there's a certain TV sitcom timing to the pacing of the film. It's filled with flashbacks of her past encounters which validates that Ally is pretty much clueless. The opening sequence of her sneaking off to preen before her bedmate wakes up smacks of Bridesmaids. There's also plenty of nudity with Ally running around in skimpy underwear, Colin just holding a towel on his crotch, skinny dipping in Boston Harbor and a groan inducing shot of McHale's backside bending over. These scenes seem to be put in there because they needed to keep your attention.

Anna Faris a competent comic actress gets to mug and pratfall while portraying a quirky young woman who has trouble picking men. Why she can't see the obvious is supposed to keep our interest until the light clicks on. Look for cameos by Zachary Quinto as the veggie cyclist and Andy Samberg as the pimple faced puppeteer. Her other boyfriends include Anthony Mackie, Martin Freeman, and Chris Pratt. Ed Begley, Jr shows up for the wedding as the free thinking father. The cast is very competent, attractive and their earnestness makes one really want to like this movie. There are some amusing moments but in the long run it's an afternoon diversion that's totally makes you forget your number.
(Review by reesa)

Email ThisBlogThis!Share to TwitterShare to FacebookShare to Pinterest
Labels: What's Your Number review