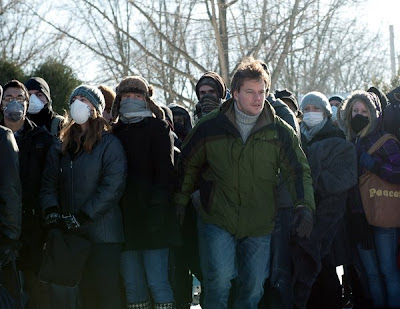 An airborne virus starts with a woman returning from a business trip overseas and it spreads like wildfire around the world. Director Steven Soderbergh and screenwriter Scott Z. Burns created a dry and realistic look at what would happen to our civilization if a deadly disease ran amok in today's society. From the Center from Disease Control in Atlanta to the World Health Organization in Geneva, Switzerland the best minds in the world gather detailed data and research how to grow the constantly mutating strain of virus so that a vaccine can be developed. The clock is ticking because once someone starts showing symptoms patients only have a few days to live.

Beth (Gwyneth Paltrow) is the first victim who returns back to Minneapolis after visiting Hong Kong on business. She manages to infect everyone who comes in contact with her from Hong Kong from the restaurant, to the airports where it begins to multiply. At first they believe she's contracted encephalitis until they do an autopsy which is probably the only truly creepy scene in the movie. The results and the reports of other cases appearing around the globe prompts the CDC head Dr. Ellis Cheever (Laurence Fishburn) into action. He sends out Dr. Erin Mears (Kate Winslet) into the field to study the current victims. She finds that Beth's son also succumbed to the virus but her husband Mitch (Matt Damon) has proved to be immune. Researcher Dr. Ian Sussman (Elliott Gould) has some success duplicating the virus, and CDC's Dr. Ally Hextall (Jennifer Ehle) tests some vaccines on monkeys. World Health Organization sends out Dr. Leonora Orantes (Marion Cotillard) to Hong Kong to look for the source but finds more than she expected. Jude Law is a blogger Alan Krumwiede who fuels the conspiracy theorists to distrust the drug companies and the government who are using the population as guinea pigs. While Homeland Security played by Bryan Cranston think that it's a terrorist plot. City leaders wonder who will pay for the emergency triages set up in sporting arenas. The world maybe ending, but it's business as usual and everyone has their own agenda.

The film follows the progression of the epidemic from day 2 to day 135 while the death toll grows unimaginably. There's the expected panic in the streets for food and vaccine as humanity fights and hides waiting for a cure. Soderbergh manages to capture the linear events as they occur filling us with snippets of statistics and science. Famous faces show up as various characters who are like the red shirted Star Trek crew members who end up as virus fodder. The plague concept has been treated better in other apocalyptic movies and this lacks the melodrama that connects the audience with a sense of urgency. The naturally immune father Mitch is the only storyline allowed some brief moments while trying to keep his teenage daughter safe. Probably the main idea was to show the whole picture of what happens if the something like the swine flu went mutant but it loses a true impact by having too many stories. Also the all star cast like in every catastrophe movie never have enough time on the screen. By the time they show you what happened on Day 1, you will never eat in a foreign country and probably be washing your hands more often and trying not to touch your face.
(Review by reesa)