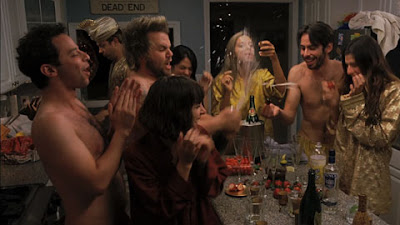 Friends since high school a group of 30 somethings gather each week at Eric's family summer house in the Hampton's. Living in the big city with their professional jobs they live for the weekends when they throw theme parties like the White Trash Bash where everyone wears mullets and other bad taste 80's costumes. The cops try to shut the parties down, but they are basically ignored and the live music, bean dip and chips served in a toilet serving dish, and for some reason a cow are involved in the night of hedonistic bliss. The next day Eric's dad informs him that the house is going up for sale. Eric thinks they should have one last big blow out for Labor Day. This one just for their small circle of friends in a good old fashioned orgy.

Eric (Jason Sudeikis) sells the idea to his sidekick McCrudden (Tyler Labine) a stoner type of dude who has been known to drop trou and jump in the pool at any given moment. The others include the workaholic Adam, the overly analytical psychologist Alison (Lake Bell), Sue (Michelle Borth) who still has an unresolved crush on Eric, shy repressed Laura (Lindsay Sloane), Doug the law student/wanna be musician and his girlfriend Willow (Angela Sarafyan) all come to agree through the course of story. Glenn (Will Forte) and his wife Kate (Lucy Punch) just had a baby and got married that summer so they were not invited even though they took offense. Eric tries to chum up the real estate agent Kelly (Leslie Bibb) so that she will delay the sale of the house until after the party and of course finds some chemistry between them.

Writer directors Alex Gregory and Peter Huyck created a Big Chill for the 21rst century basically dumbed down for this new generation of raunchy immature movie goers. Not to say it's not funny. It is at times refreshing and hilarious. It's great seeing Don Johnson show up as Eric's dad who romances young women by teaching them to golf. Each of the characters have their moments to shine and you actually get to know their little quirks. Even when they are resolving some long seated issues with each others before engaging in the bacchanal it's still amusing waiting for them to engage in the inevitable free for all. Eric and McCrudden also visit a local secret group sex club for “research” that has the only actual nudity in movie. The main stars don't show much but a butt. It's curious that the women are all well toned and attractive while the men are sort of out of condition, but they are still considered ok and doable. But this is a male fantasy story, so just accept it for that and an afternoon of mindless entertainment.
(Review by reesa)

Posted by Dallas Movie Screenings at 8:27 AM