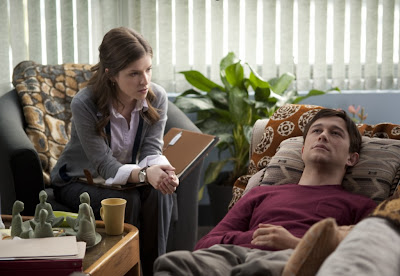 How many times have you wondered if that ache or lump under the skin is cancer. We consciously stay away from foods or conditions just because it may be carcinogenic It's the one big disease that everyone fears and it's so random in who it attacks. It is especially heinous when it attacks young people. Written by Will Reiser about his own cancer diagnosis in his early 20's and director Jonathan Levine this film offers up a touching and humorous account of what it's like when told one has a 50 percent chance of survival.

Adam (Joseph Gordon-Levitt) notices some pain while running. His doctor discovers he's got a rare spinal cancer that doesn't offer much hope, but sets him up for chemo therapy. Adam works at Seattle's public radio station with his best friend Kyle (Seth Rogen) who is a crass and awkward wing man who doesn't like Adam's girlfriend Rachel (Bryce Dallas Howard). That's because even though she's beautiful she's kinda shallow. Dealing with someone's illness becomes about her instead. Adam's co-workers respond with the typical awkwardness. His parents, especially his mother (Angelica Huston) wants to smother and protect. To deal with all these conflicting emotions that seem to be coming from everyone else but him he sees student psychologist Katherine (Anna Kendrick). Adam is her second patient and her earnest and sympathetic approach is often uncomfortable. Kyle on the other hand as his best friend couldn't be more opposite in personalities. Adam is more introspective and reserved, Kyle is a foul mouthed womanizer. Yet he has a great supportive bromance with Adam all the while seeing the opportunity to use the cancer card as a way to pick up girls.

Gordon-Levitt gives a great nuanced performance of someone who is facing something really devastating with grace and compassion without getting over sentimental and maudlin. Anna Kendrick's Katherine shows a quieter, inexperienced and more thoughtful version of her character of Up In The Air. She's more bungling, and can't seem to master that tender doctor/patient assurances. Angelica Houston as the smothering mom reminds everyone that she's sorely missing on the big screen. While the subject of cancer doesn't seem like it should be treated so lightly, 50/50 gives us an view that just surviving day by day is a chance to enjoy and endure. Adam's friendships with other's getting chemo, Phillip Baker Hall and Matt Frewer as Alan and and Mitch puts a face on the disease and gives him strength. Bryce Dallas Howard has the harder part as the girlfriend who can't handle having a sick boyfriend much less the after affects of his chemo treatments.

A movie about cancer is probably not a big draw but will hopefully not be missed as it is an amusing film which does all the right things by displaying the right balance with spot on performances. There is only one slight complaint with the timeline. You don't get a sense of how many months, weeks, days these events take place. The ending will also not disappoint or have anyone needing a box of tissue. After all Will Reiser has been in remission for years and with this being a comedy a tragic ending would be out of place. It also shows that people who are afflicted with such a dire disease don't lose their sense of humor, there's no daily emotional outburst and we are all living the best we can.
(Review by reesa)

Email ThisBlogThis!Share to TwitterShare to FacebookShare to Pinterest
Labels: 50/50 review