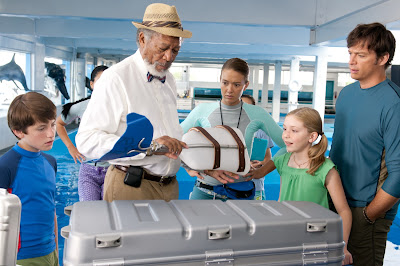 There are several sea creatures that are always popular on TV and in movies like penguins, seals, whales and especially dolphins. The intelligent species makes humans sympathetic to their antics and blights. This particular tale is based on a true story of a dolphin who was caught in a crab net at 3 months old had to have her tale amputated to save her life. The Scholastic non fiction picture book entitled Winter's Tale was published in 2007. Even today Winter the dolphin is a popular feature at the Clearwater Marine Aquarium and a live feed on a web camera lets people visit in real time online.

This dramatized version lets us see the dolphin through the eyes of Sawyer Nelson (Nathan Gamble) a middle school student who has some issues due to an absentee father and his closest cousin who just joined the army is being sent to war. His mom, Lorraine (Ashley Judd) is a nurse and like every working single mom has to juggle the job and teacher conferences. One day Sawyer finds a dolphin on the beach of Clearwater, FL dangled in nets and in distress. While someone calls for help, he tries to comfort the frightened creature by imitating it's whistles. The marine rescue team shows up and the vet's daughter Hazel (Cozi Zuehisdorff) invites him to check up on the dolphin later.

The aquarium has seen it's better days. The funding from government sources have been cut short and the board of directors are contemplating selling it to a multi-millionaire (think Virgin Airlines Richard Branson) who wants to build a hotel on the site. In the meantime they remain open giving school tours and rehabilitating wounded sea life. Winter's injuries are quite severe as she lost both tail flukes and the caudal peduncle had been severed. The aquarium vet Clay Haskett (Harry Connick Jr.) has to amputate her tail. As the dolphin recovers she must be kept afloat with human handlers 24/7 so she won't drown. Obviously stressed, Sawyer seems to be the only one that is able to calm her. Soon he is skipping school to hang about the aquarium to help the dolphin and become friends with the vet's daughter Hazel. As Winter learns to swim again, the muscles and angle she must contort her body to do so is detrimental to her health. Sawyer meets the prosthetic doctor at the VA hospital where his cousin is recuperating from his war injury. Dr. McCarthy (Morgan Freeman) is challenged to create something which after many starts and stops is able to get the dolphin swimming again.

Director Charles Martin Smith is known mostly from his acting roles worked from the a script by Karen Janszen and Noam Dromi. The film also features Kris Kristoffrson as Reed Haskett the grandfather of the clan. Frances Sternhagen as the head of the aquarium board. In reality Dr. McCarthy is a composite of 2 men who worked for 4 years creating more that 50 tails for the growing dolphin free of charge. Their development of a special gel to help fit the prosthetic on the tail has helped human amputee patients. Winter has also motivated many other people with disabilities who are coming to terms with their injuries. Dolphin Tale is an inspirational film that doesn't hit you over the head in proselytizing or cuteness. The two young leads are believable and amazingly not annoying. The central theme of overcoming the hardships that life serves you actually makes one applaud and leave the theater actually feeling good about oneself.
(Review by reesa)