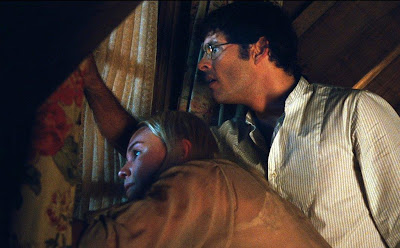 Straw Dogs are a Chinese ceremonial objects which are dressed up, put on the altar then tossed away when it's over. Which is how David, a Hollywood screenwriter describes the redneck denizens that live in the small town of Blackwater, MS. He and his actress wife Kate are returning to her family home after her dad passed away. The old stone farmhouse is in need of repair after a hurricane. They plan to use the FEMA money to fix the house while David works on his next script about Stalingrad. Her celebrity status doesn't cause much of stir because the locals remember her as a popular cheerleader who used to date Charlie the town alpha male who doesn't consider her marital status a deterrent for him to try to pick up where they left off.

James Marsden and Kate Bosworth play David and Kate the attractive young couple who drive their '67 Jaguar XKE into town,try to buy lunch with a debit card (they take cash only) and spotty cell service. James wanting to make a good impression on the town's people tries to be friendly despite the snide comments layered in southern hospitality. He's shocked by the violent behavior of the town's football coach (James Woods) whose loud abrasive manner is considered an annoying eccentricity. David hires Charlie (Alexander Karsgard of True Blood) and his friends to do repairs on the barn roof. Although their presumptuous rude ways disturb his writing, he's determined to try and be polite not only for the sake of his wife but because he's also a pacifist. Kate tells David the workmen are ogling her during her jogs, and he suggests she wear a bra. It ticks her off so much that she teases the guys with a strip tease from the window which seems out of character and merely a device to set up what happens because it it. Kate would like David to become more aggressive especially when they find the family cat hanging in their closet. Instead David allows the guys to take him hunting which they set up so that Charlie can go back and to confront Kate. There's also the subplot with the local pedophile Jeremy (Dominic Purcell) who raises the ire of the coach who's 15 year old daughter keeps enticing him. The coach is so out of hand even the local sheriff, the only resident of color it seems, can't quell his over the top insanity. Considering the stereotypical attitudes of the local rednecks it's a wonder he survived so long.

Forty years ago Sam Peckinpah's controversial film joined a list of other titles that year like Clockwork Orange, The French Connection and Dirty Harry which displayed an alarming increase of violence. The rape scene was particularly disturbing because of it's blatant debasement of women. Yet it's still considered one of his best movies outside of the Wild Bunch. But ask today's audience and no one is aware of this or other classic movies made in this era. The changes from the original and the remake are the location from England to America's deep south, David from mathematician to screenwriter, the wife Amy went from just a wife to Kate an actress, but the other characters are pretty much the same. It's been slicked down, cleaned up and recycled for today's audiences who are just coming for the shock value of the violence in the last act. It just lacks the depth of the relationship so emotionally resonate in the original movie. The one thing it does retain is the central theme of a person's ability to rise to the occasion when threatened. So one should rise to Netflix and rent the 1971 version.
(Review by reesa)